Many cooking techniques originated in France, the home of rich and remarkable cuisine. This includes many soup and sauce bases, which, when expanded upon, can be used to create even more delicious dishes.

Something else I like about French cooking is how each technique builds on the next, so don’t be intimidated by the recipes.

These are the best French soups to make at home. There are so many soups on this list there’s an excellent option to enjoy anytime, but in general, rich French soups are perfect for cold weather.

Try them for a filling meal for lunch or dinner, or experiment with one of these soups whenever you’re craving something delicious. 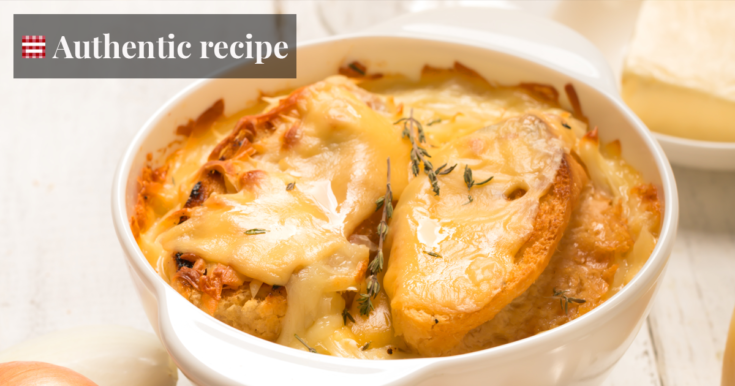 This vegetable is sauteed in butter to create a base full of rich flavor, which is why this is one of the world's most popular soups.

The other centerpiece of this soup is the crouton or slice of crispy toast, which soaks up the delicious onion taste of this soup.

I like to use yellow onions, but you can use any type of onion for this classic French soup.

This example of French soup blurs the line between soup and stew.

The rich broth is accompanied by beans, potatoes, turnips, and carrots.

Delicate fresh herbs round out the flavor of this soup with just a touch of acid from apple cider vinegar. 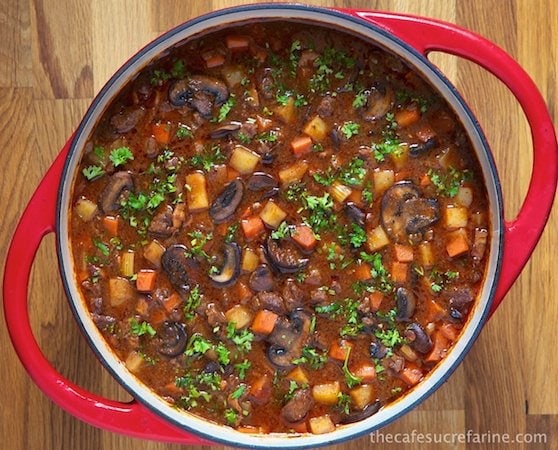 Beef Bourguignon Soup uses a hearty helping of beef for a meaty taste with layers of flavor introduced with the addition of bacon.

Garlic and onion bring complexity when combined with red wine for an intense, rich soup.

My favorite part of the soup is the mushrooms that absorb all the flavors while bringing a rich earthiness. 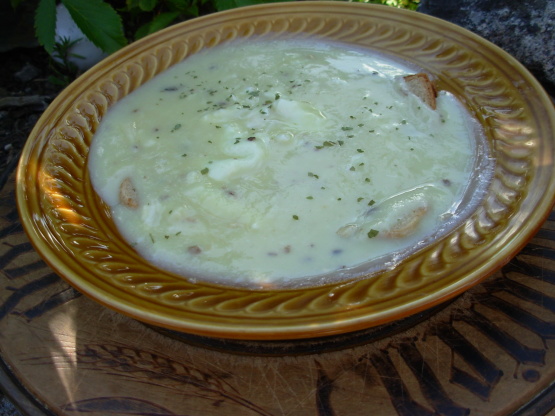 Try this recipe for a simple take on Tourain Du Perigord, a garlic soup with many regional variants.

This rich soup calls for butter or goose fat to create a rich roux which, when incorporated, thickens the soup.

Though this recipe calls for a dozen cloves of garlic, I like to add a few more for an even more robust flavor.

You can even use different kinds of garlic for more complex flavors. 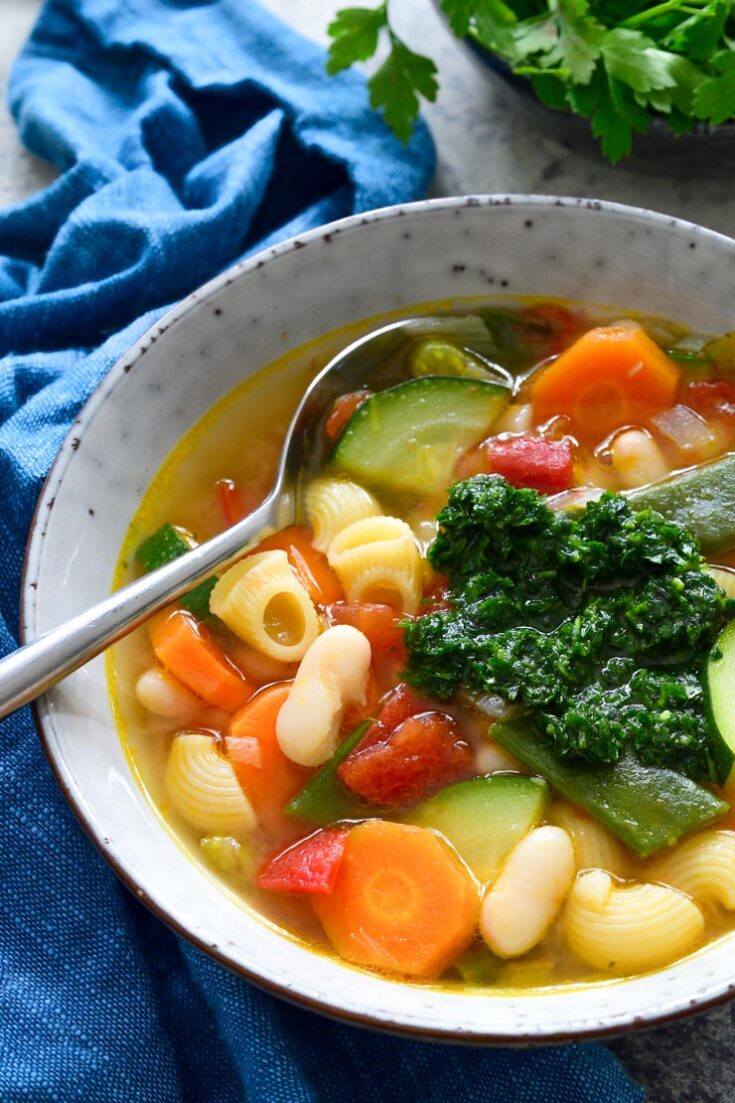 Beans and macaroni (or the short pasta of your preference) ensure this vegetarian option is still hearty.

The array of vegetables used in the dish adds layers of flavor, from spicy garlic to delicate zucchini.

Top with an herbaceous pesto for a fresh, inviting soup. 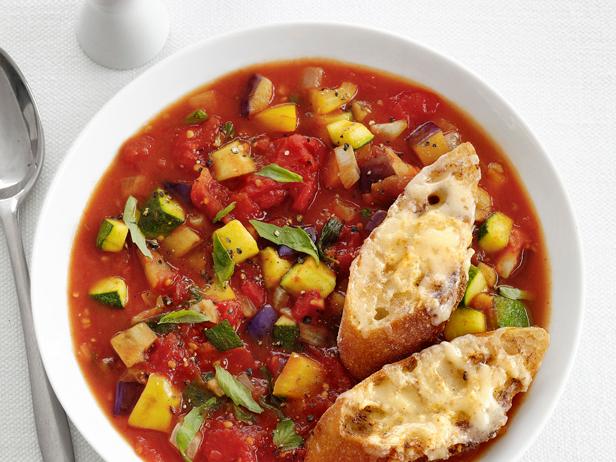 This beautiful soup makes an impression before you even taste it!

I love the colors of this Ratatouille Soup, from the bright red broth to the vibrant chopped vegetables inside.

This soup is thick with diced vegetables like eggplant and bell pepper and seasoned with herbs, making complex flavors in this simple soup. 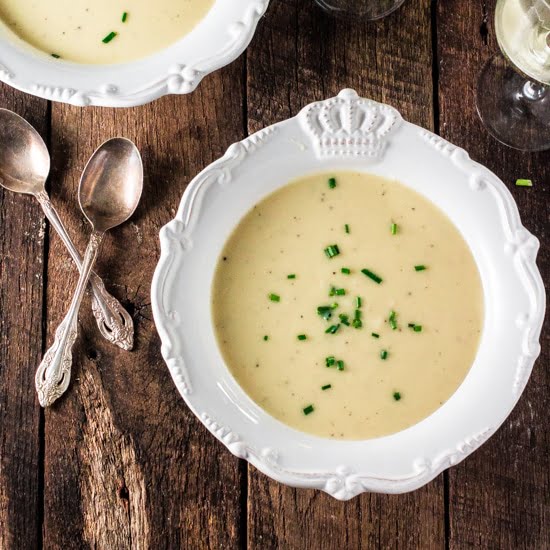 One of the best French soups with a simple preparation, Classic Vichyssoise Soup focuses on two prominent flavor profiles, leeks and potatoes.

The soup comes together as a rich soup with a generous portion of heavy cream rounded out with chicken stock.

This is my favorite warming soup, perfect for a chilly evening. 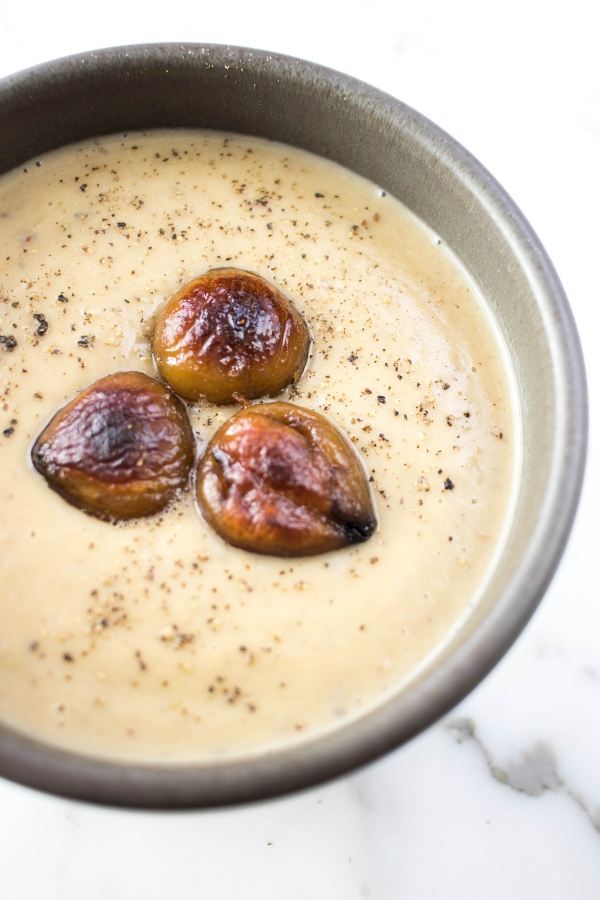 Another creamy option, French Chestnut Soup, is rich and filling.

The soup contains only a few ingredients, with most of the flavor coming from onion and chestnut, which adds another buttery element to the soup.

The recipe can be made from fresh or pre-cooked chestnuts, but I prefer the pre-cooked since it speeds up prep time. 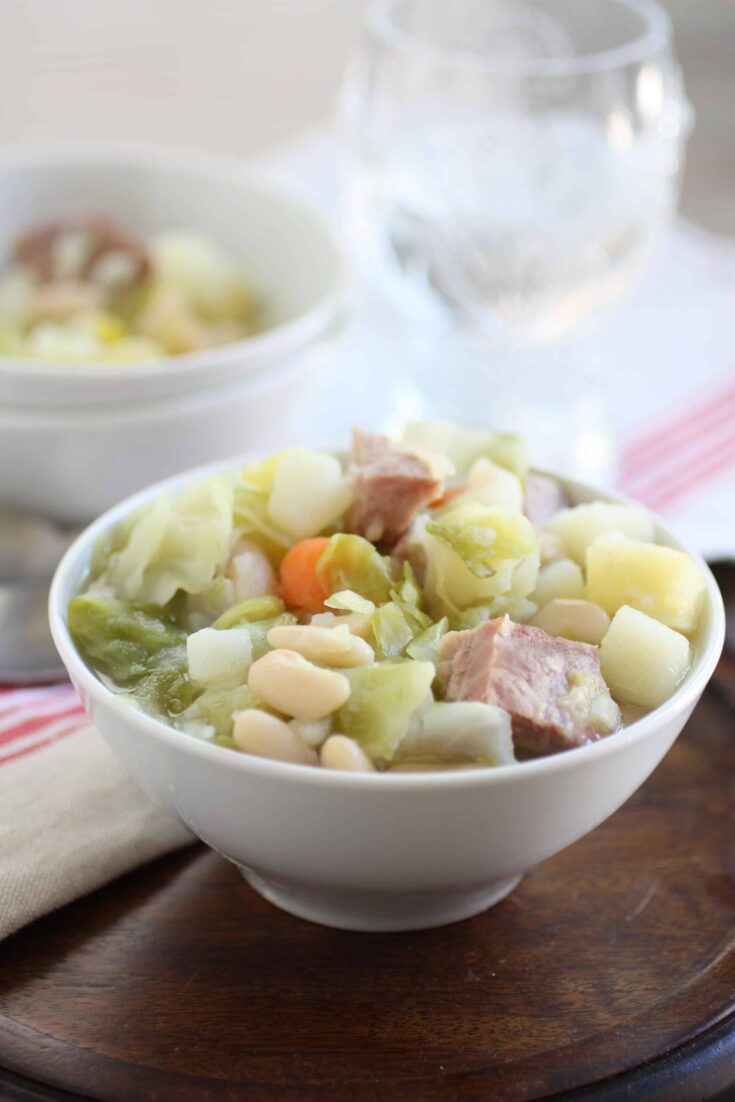 Farmer Soup starts with a round of ham boiled with dried white beans for over an hour.

The resulting broth is meaty and complex.

Potatoes, parsnips, and green cabbage give body to the soup providing some texture and additional flavor.

Like most French soups, Farmer Soup is best enjoyed with a side of crusty French bread. 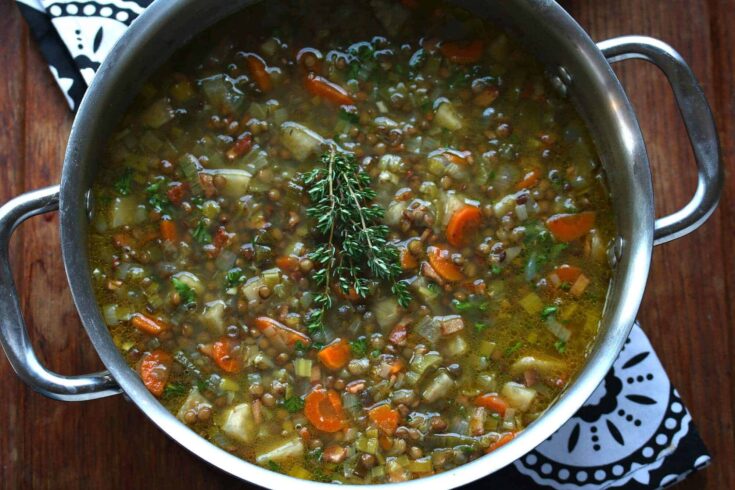 Any lentil soup is always a winner for me, but this French Lentil Soup stands out.

Not only is there a rich flavor from the legumes, but bacon also adds another layer of savory notes.

A trio of celery, carrot, and leek add depth to the soup and some texture. Add herbs last for a burst of flavor and freshness in the soup. 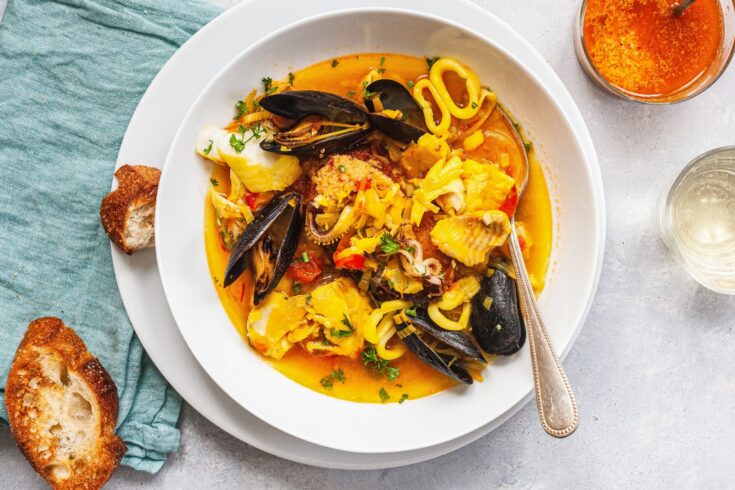 A regional dish from the South of France where the seafood is fresh and plentiful, Bouillabaisse is one of the country’s most famous dishes.

Traditionally, this fish soup was made with whatever extra seafood local fishermen had on hand, but this recipe calls for three types of fish filets, clams or mussels, and crab!

Bouillabaisse is one of my favorite seafood soups! 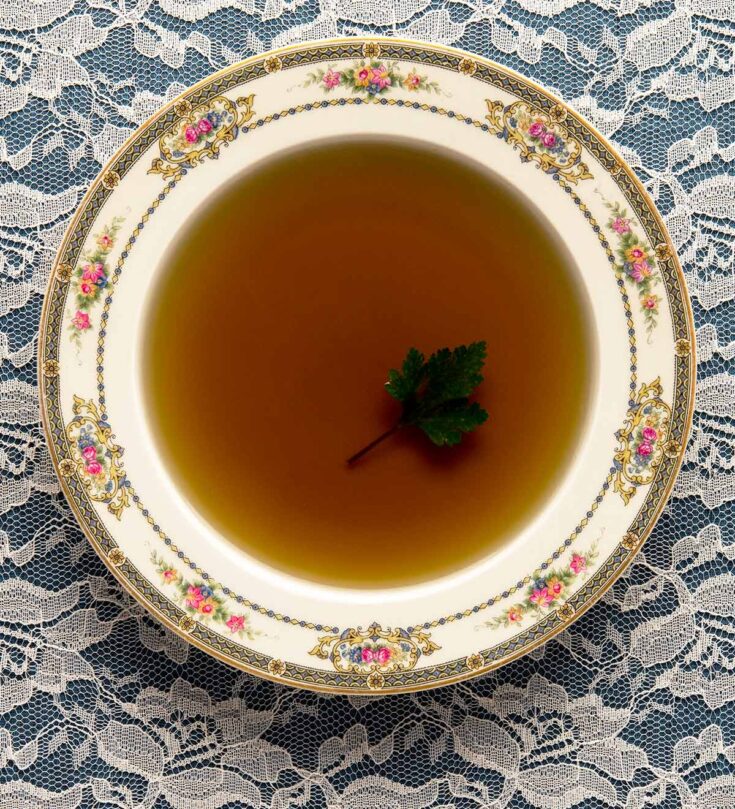 Despite the looks of this broth-based soup, a lot of work goes into making it.

This soup can be made with various proteins, but this recipe uses duck broth for an intricate flavor. 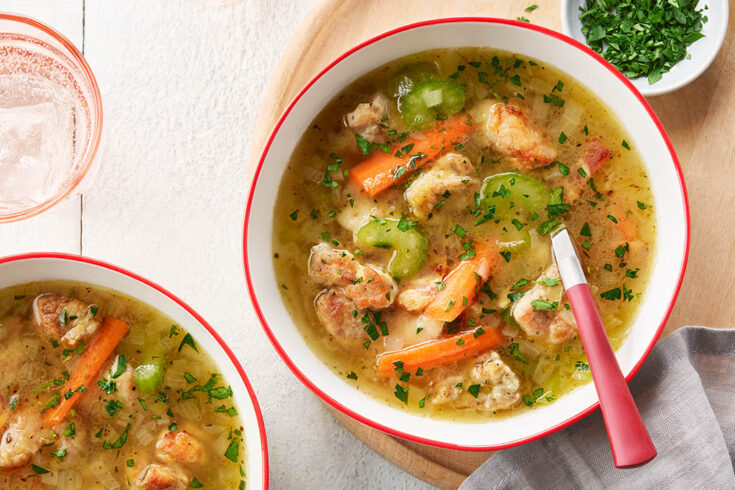 This French Provençal Soup Recipe uses premade broth made with white wine to save time while making this herbaceous soup.

Made from hearty and fatty chicken thighs and bacon, this is a deceptively filling soup.

I appreciate the cut of the vegetables varying to showcase color and technique. 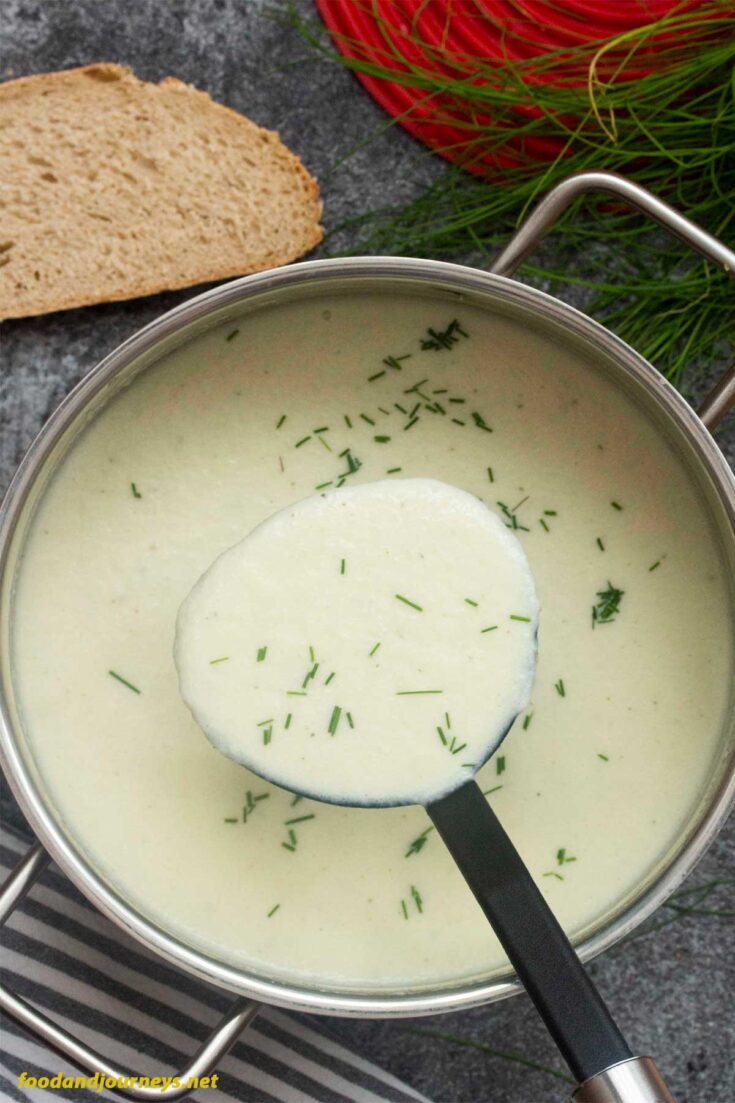 For a vegetarian soup that’s rich and satisfying, prepare this French Cauliflower Soup!

Incorporate vegetable broth in your blended cauliflower and cream to round the soup to the perfect consistency.

The soup gets flavor from herbs, onion, and celery, but I appreciate the hint of added nutmeg the most. It brings an unexpected but pleasant taste. 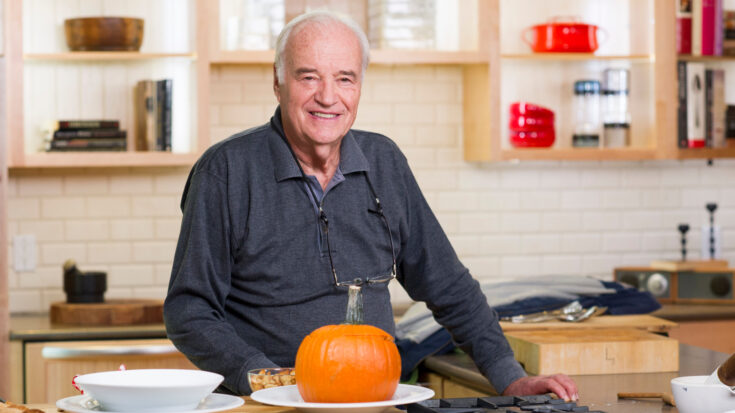 Potage au Potiron, or Pumpkin Soup Served in a Pumpkin, is an outstanding soup that tastes as good as it looks.

I love bringing this show stopping soup in a pumpkin to fall dinners, where it always makes a lasting impression.

White wine and cream are both ingredients in this soup, creating a rich and flavorful broth. 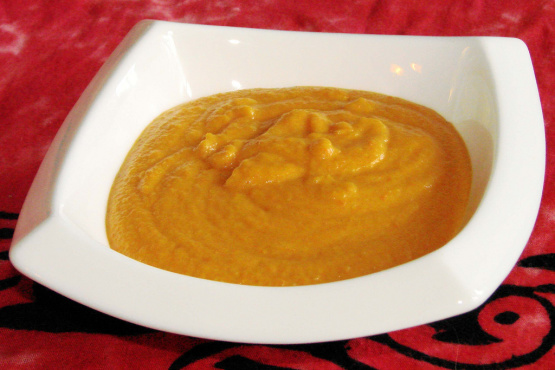 A beautiful soup with a bright orange color, Potage Crécy or French Carrot Soup, highlights the vegetable's sweetness while coaxing out savory notes.

Onions and tomatoes bring additional flavor to the soup.

Though this recipe calls for chicken broth, it could easily be swapped for vegetables to create a vegetarian dish. 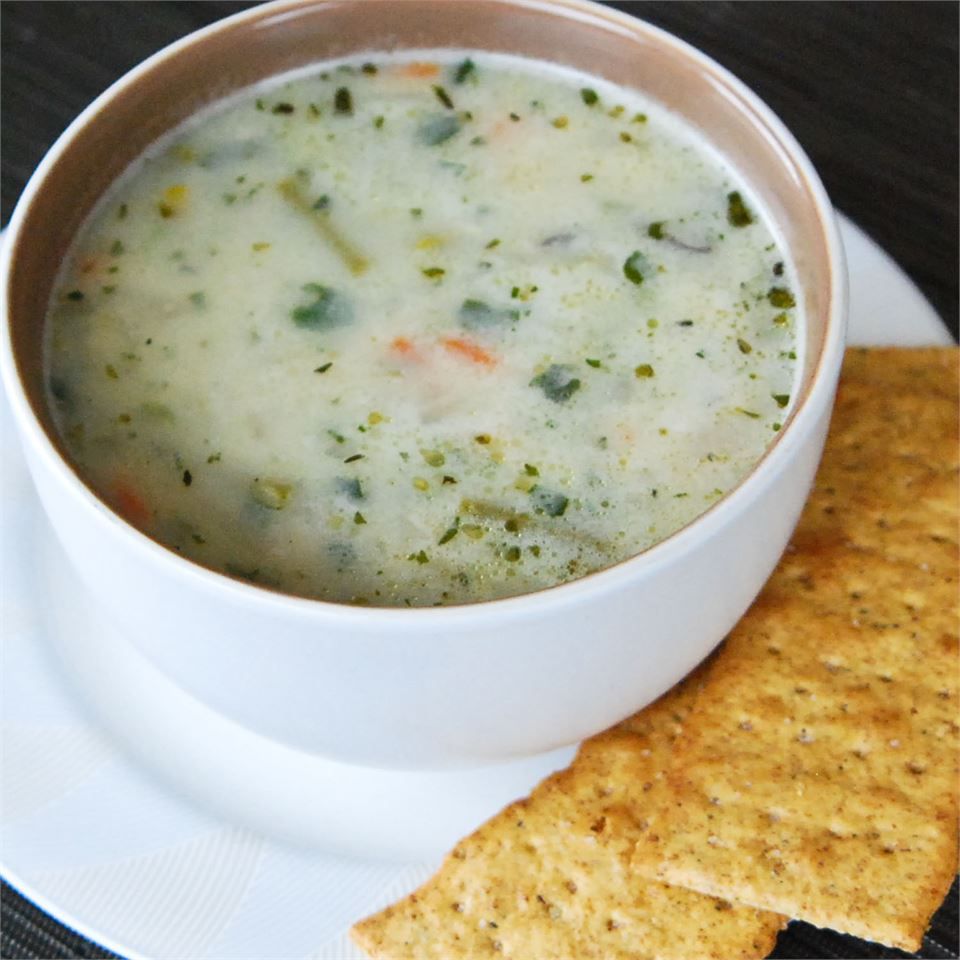 French Spring Soup includes many vegetables that will be the first to appear in your garden, like asparagus, leeks, and spinach.

These spring vegetables and others are combined with butter and heavy cream to create this vegetable-forward soup.

For added flavor, substitute the water called for in the recipe with the broth of your choice. 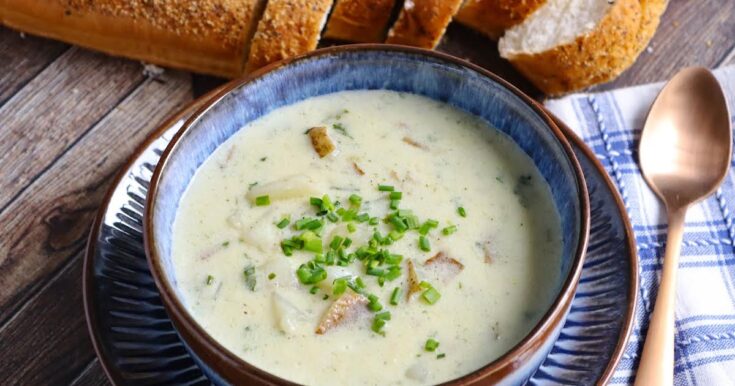 When I look at creamy soups, I sometimes get intimidated by what I assume will be a challenging recipe.

However, this French Potato Soup has a straightforward recipe with only three steps.

Potato is the star, with few other ingredients to season the soup. The resulting soup is simple but delicious. 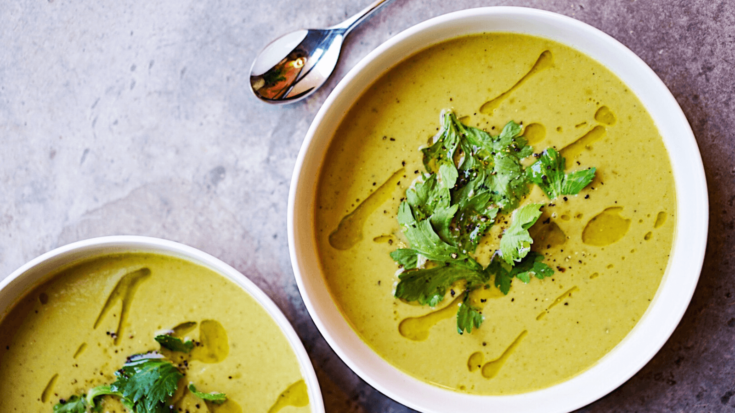 French Peasant Soup Recipe With Leeks & Potatoes looks like a cream soup but isn’t one.

The color of the soup comes from French mustard, which adds a sharp edge to this otherwise savory soup.

Bacon also lends to the savory flavors, cooked in oil alongside the potatoes and leeks. 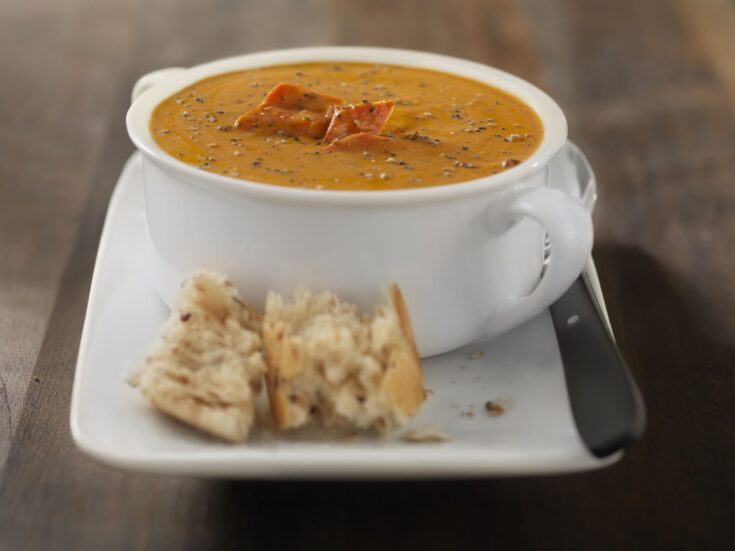 One of the most famous French soups, and my favorite, French-Style Lobster Bisque, is a rich soup full of lobster meat.

Shredded carrots and paprika give the soup it's signature orange hue.

With cream, cognac, and white wine, this soup brings layers of flavors to the palate!

This soup is perfect for stormy weather, especially if you are by the sea.

Try these famous French soups to keep you warm, and pair them with your favorite French wine or even a classic French sandwich for a complete meal!