Canada may be one of the largest countries by land, but it’s also one of the least densely populated countries in the world. Despite its low population, Canadians have developed a rich culture over the nation’s short history.

A key aspect of any culture and a special source of patriotic pride is a country’s culinary traditions. Canada has a wealth of delicious foods, many of which have gained worldwide popularity.

Read on to explore my list of the most popular Canadian foods. 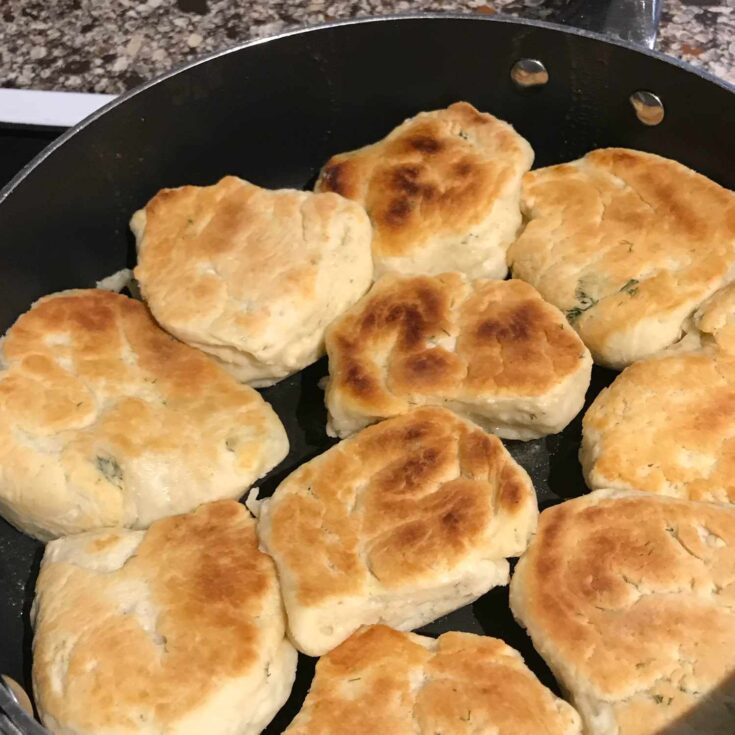 I’ll start with the original Canadian food, invented by the indigenous tribes and co-opted by the settlers and fur traders.

Bannock is a quick-bake fry bread that doesn’t have yeast, but still fluffs up and absorbs the oils or butter used to pan-fry it.

It’s hard to find something I don’t like about fried bread! All I know is I don’t have to butter it. 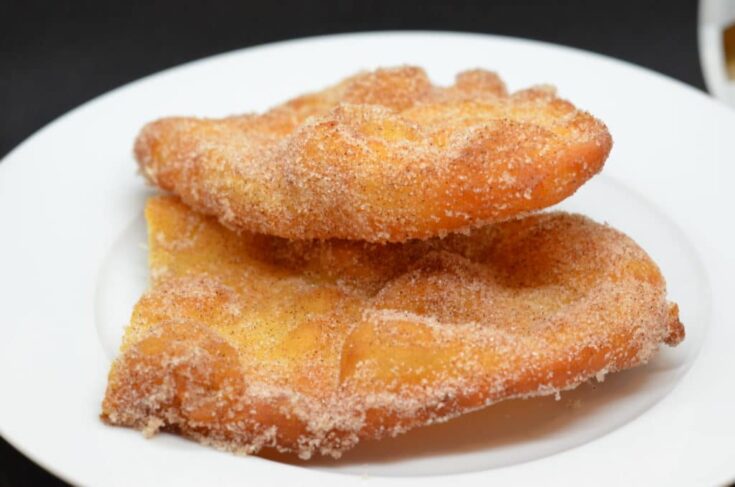 Beaver Tails is the modern, dessert version of Bannock, consisting of fried pastry dough in an oblong flat shape that resembles a beaver tail.

Unlike Bannock, they have yeast along with milk, sugar, and a lot of butter for a doughnut-like density.

You can coat Beaver Tails with traditional sugar and cinnamon dust. I like to get creative and top them with melted chocolate or lemon vanilla glaze. 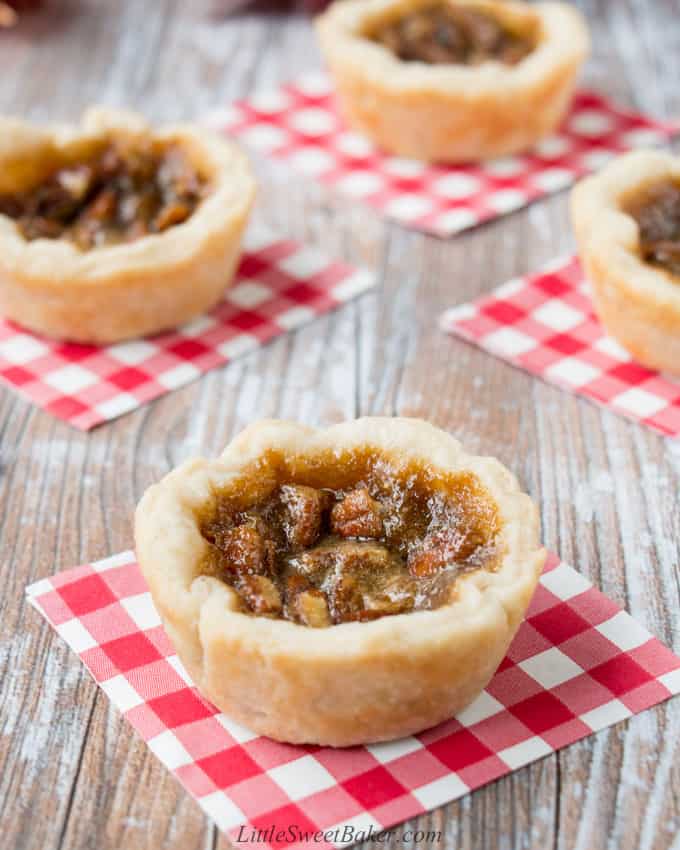 These delightful, bite-sized desserts feature a thick pastry shell stuffed with a buttery custard made with butter, eggs, sugar, and syrup.

I love the depth of texture these butter tarts display as I bite through the dense crust to a crunchy top, and finally a gooey and gelatinous custard. 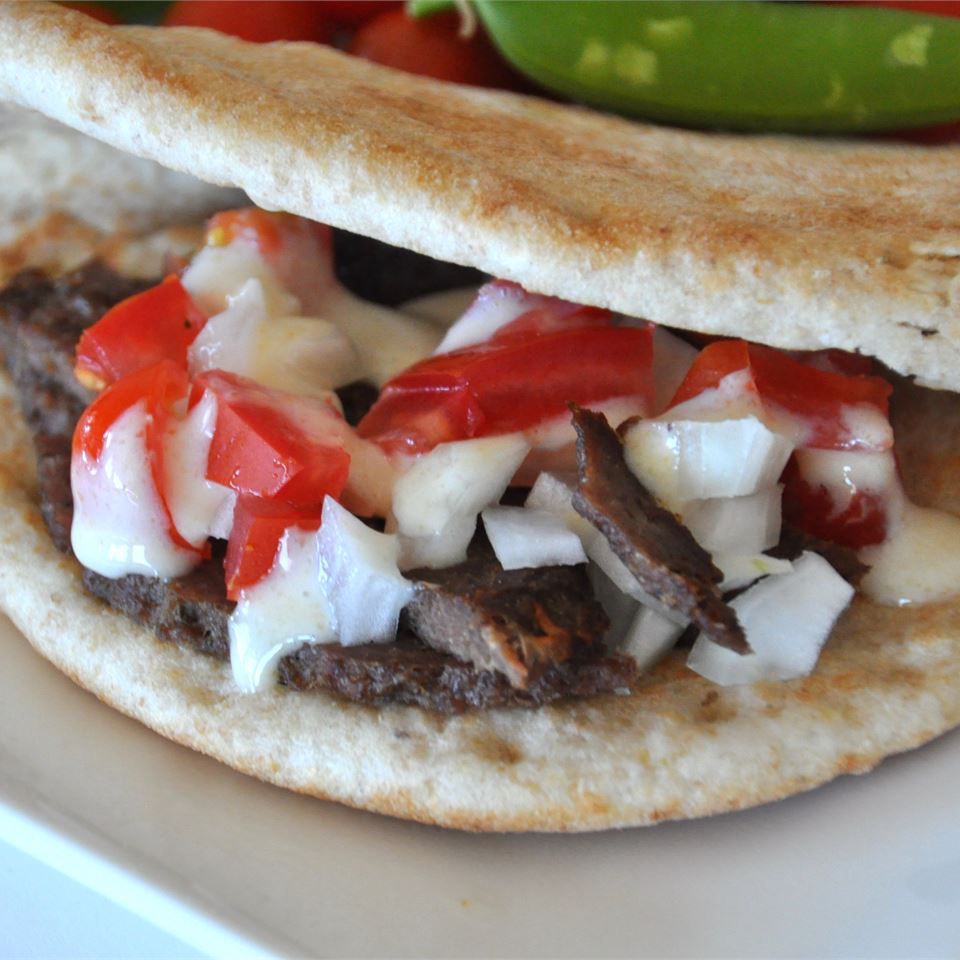 Thanks to Canada’s Mediterranean immigrant population, donairs are as popular in Canada as they are in Turkey or Greece.

According to lore, Canadian donairs originated in the 70s from a Greek restaurant in Halifax. 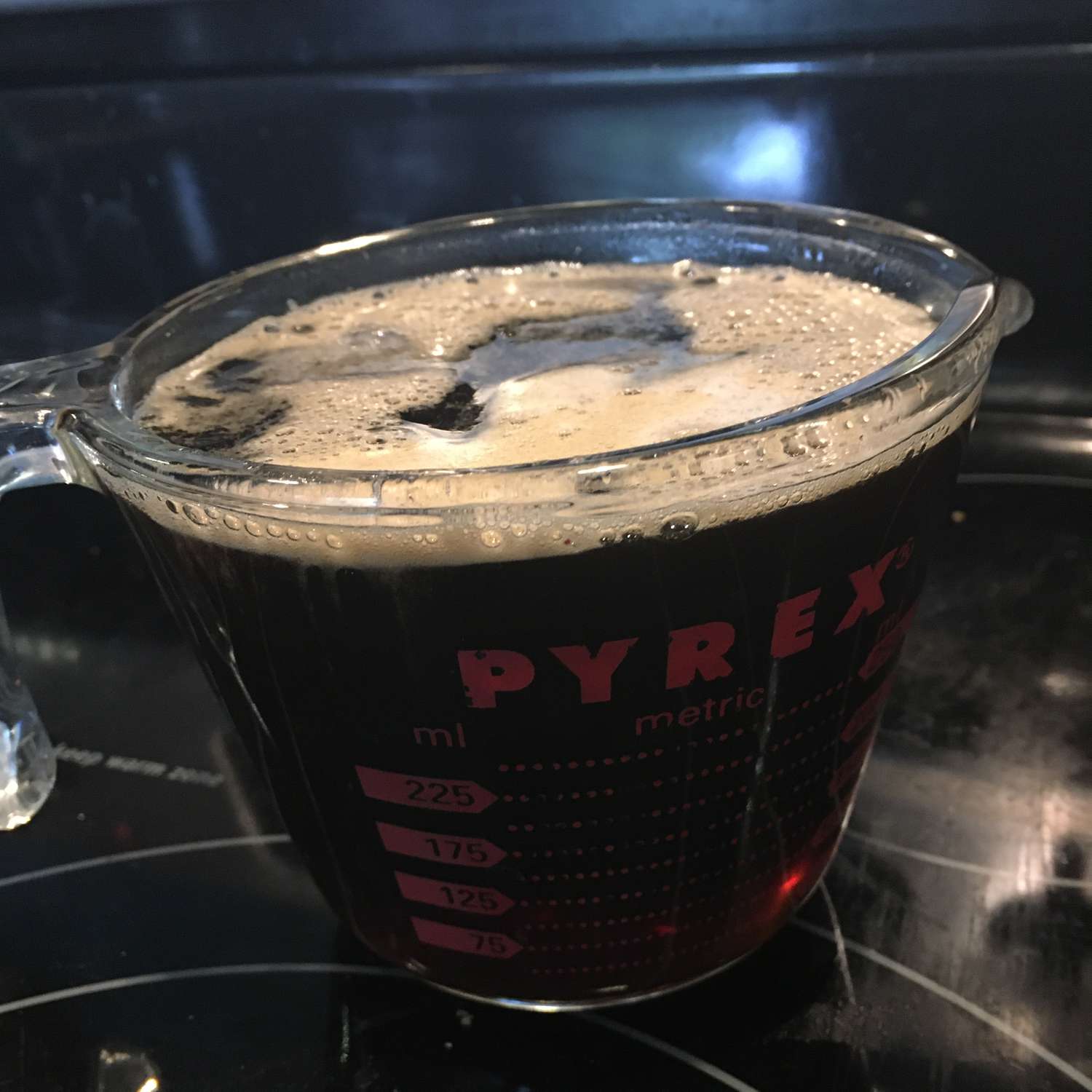 A maple leaf is the centerpiece of the Canadian flag, so you know maple syrup must be a key ingredient in any national dish.

You’ll see maple syrup-flavored food of every kind in Canada, from bacon to baked beans.

Maple is, in my opinion, the most delicious natural sweetener on earth. 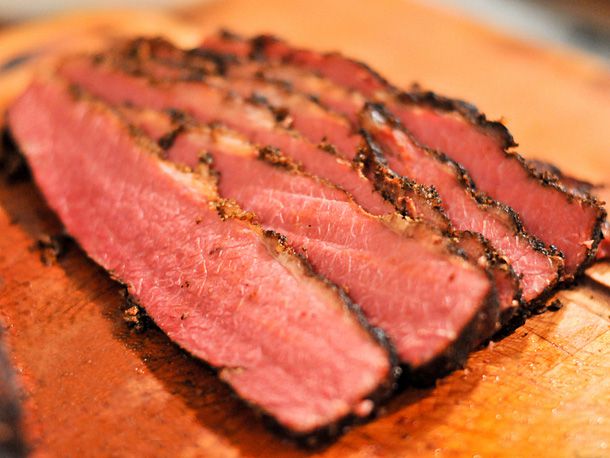 Montreal is Quebec’s largest city and home to one of Canada’s most diverse and cosmopolitan populations.

Montreal has a large Jewish population, which has contributed to its culinary popularity.

One such Jewish-inspired specialty is Montreal Smoked Meat, a kosher cured and salted beef brisket that’s usually served deli-style, sandwiched between rye or sourdough with mustard. 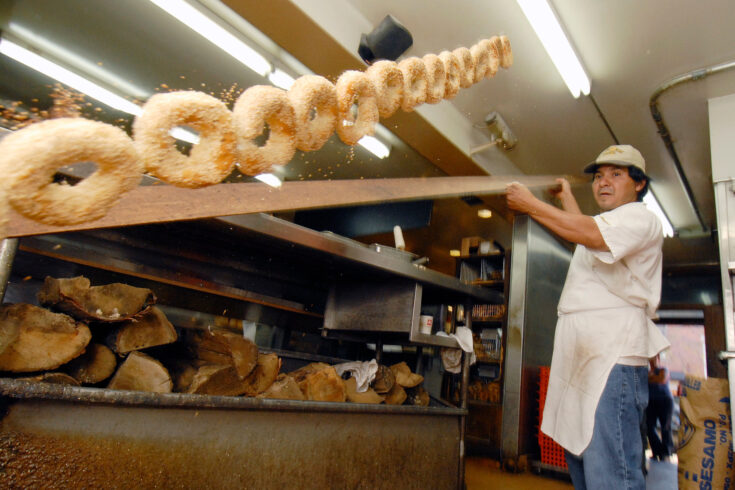 Move over New York, Montreal bagels are a worthy contender that even New York shops are beginning to offer.

Another gift from the Jewish community, Montreal bagels are thinner, sweeter, and much denser than the standard New York bagel.

They still come in all manner of flavors. I’m partial to sesame seeds, myself. 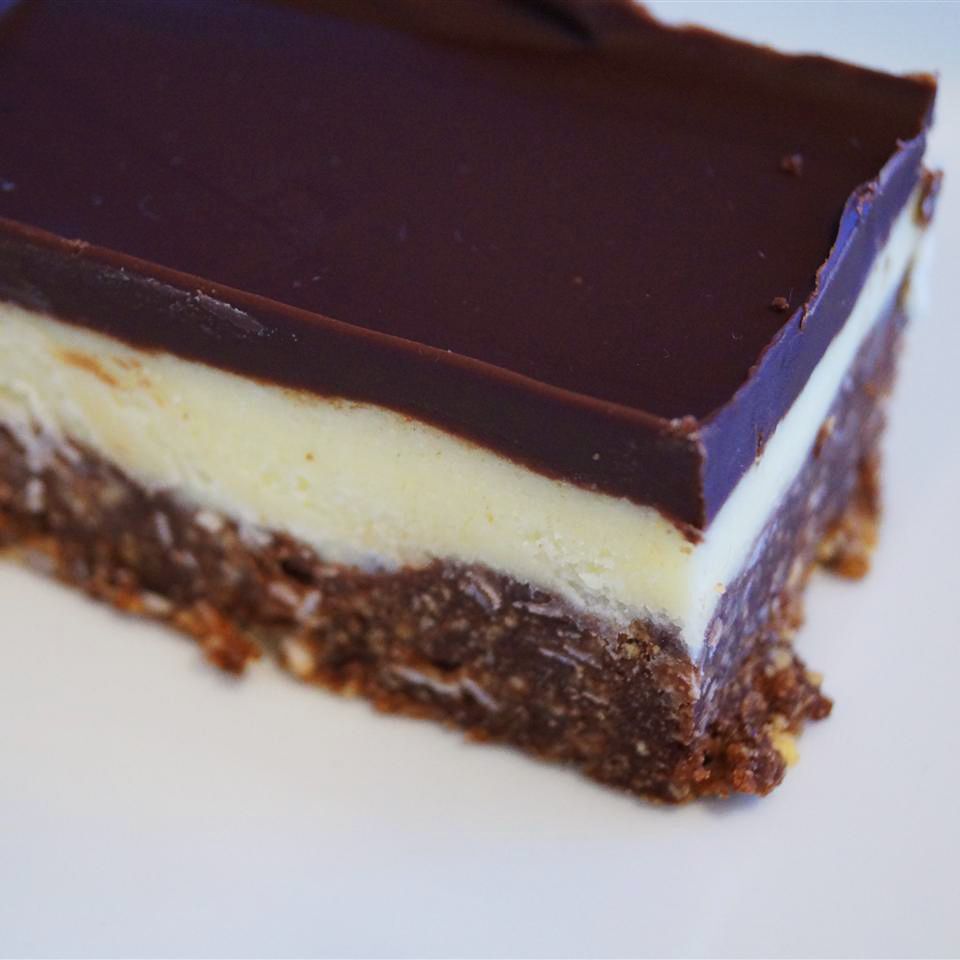 They consist of three decadent layers, starting with a chewy coconut, nut, and wafer foundation topped with a layer of custard and finished off with a thick layer of chocolate ganache. 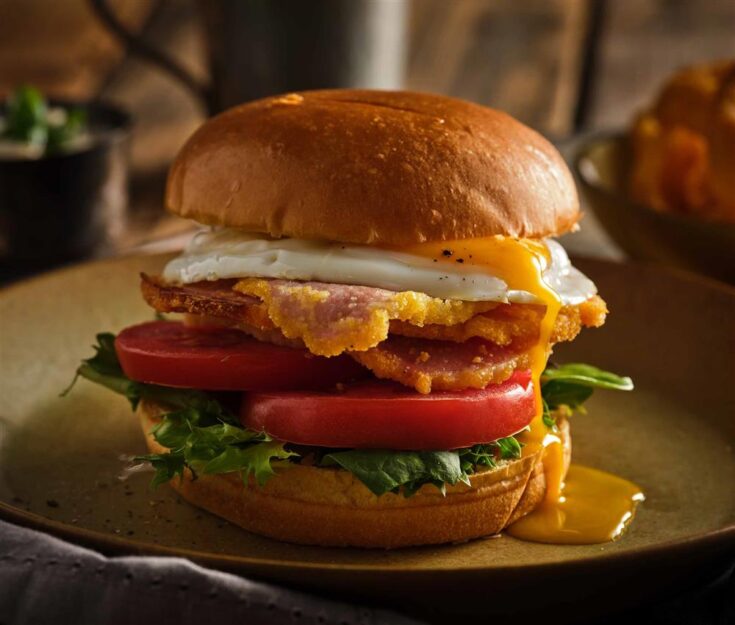 A historic Canadian food from the province of Ontario, the Peameal Bacon recipe originated from a pork packer and British immigrant to Toronto in the 1850s.

The name is a little misleading as Peameal Bacon is more like a lean boneless ham.

It tastes like ham as it is not smoked. The only crunch you get is from the cornmeal coating once you throw the pork in the oven. 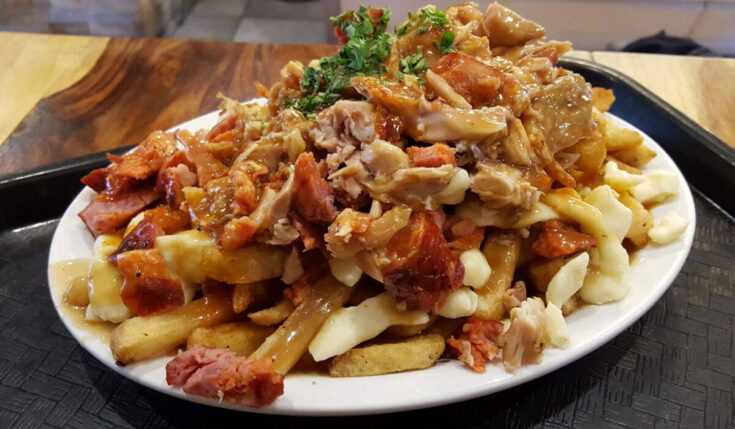 Thick-cut French fries get a hearty topping of mild cheese curds before being smothered in gravy.

If there’s one thing Canadian winters are good for, it's comfort food that sticks to your bones!

Poutine couldn’t be more decadent. I especially love the firm consistency of the cheese curds. 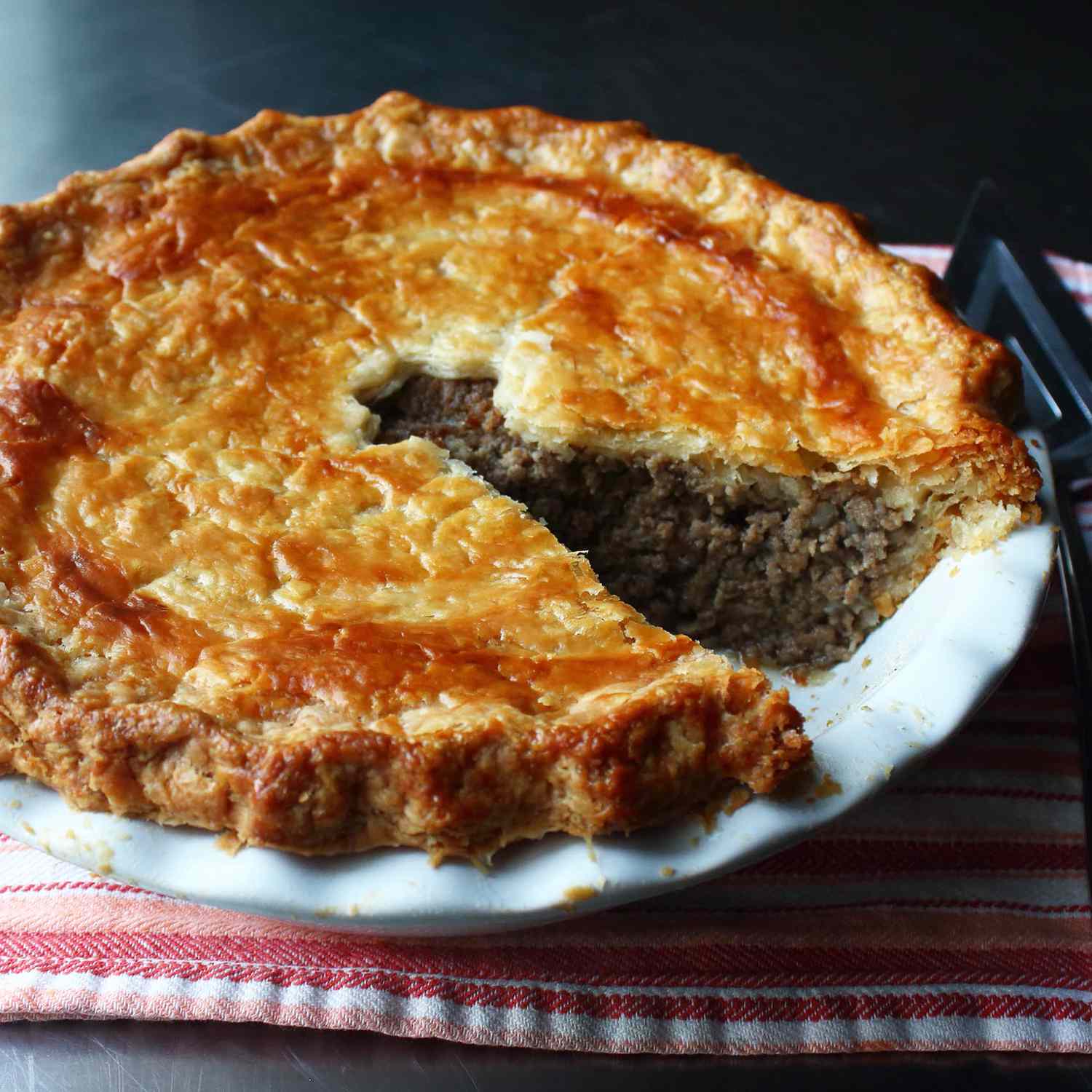 Tourtiere reminds me of a meat pot pie, made in a Dutch oven-type baking dish stuffed with minced pork or beef, seasonings, potatoes, and aromatic veggies and topped with a buttery dough shell.

Each Quebecoise city has its own version and the meat pie fad has caught on in the anglophone provinces. 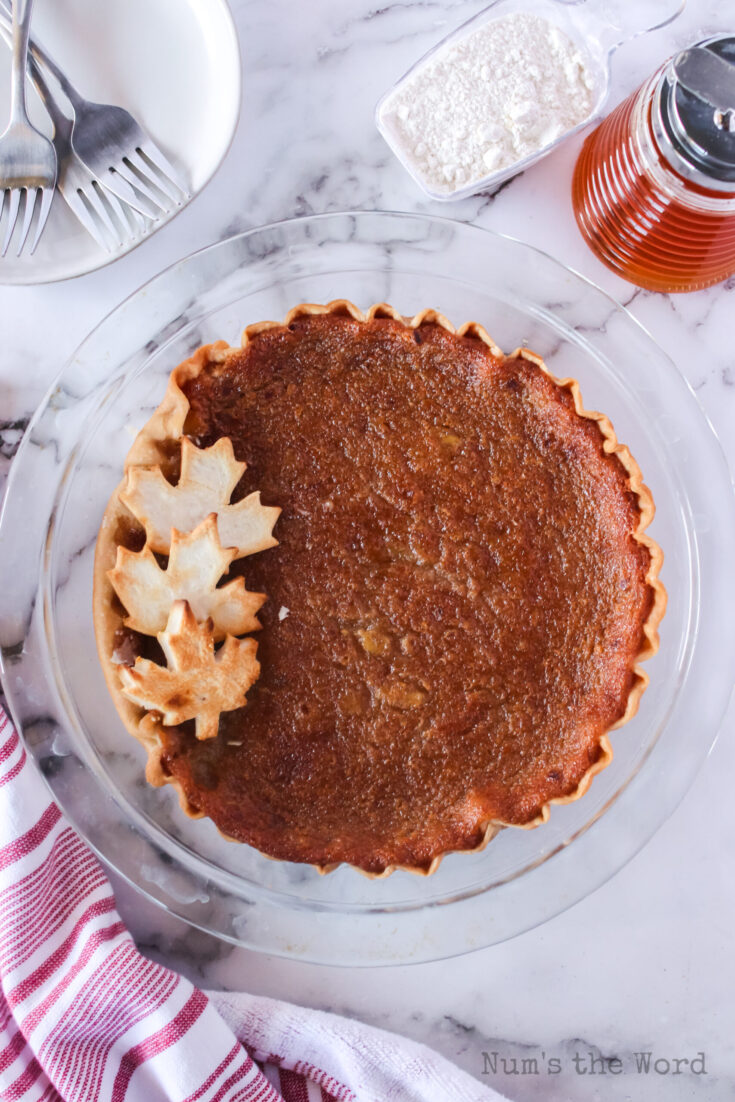 Maple Syrup Pie achieves the magnificent feat of turning syrup into a custard.

I love the texture of this pie, which reminds me of a buttermilk pie filling.

The U.S. has Dunkin Donuts while Canada has Tim Hortons, an all-encompassing coffee, donut, sandwich, and snack counter.

There’s one every few blocks in any Canadian city or town.

Tim Hortons decided not to discard the donut holes, but to sell them under the name timbits.

These bite-sized donut balls come in as many flavors as the doughnuts from which they get stamped out. 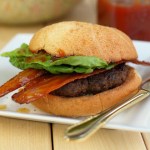 Maple is as much a savory additive as it is a sweet one.

Canadians love their maple-infused meats, and the Canadian Maple burger showcases maple in both beef and pork products.

These burgers smother beef patties in maple-infused barbecue sauce and top them with maple-candied bacon. 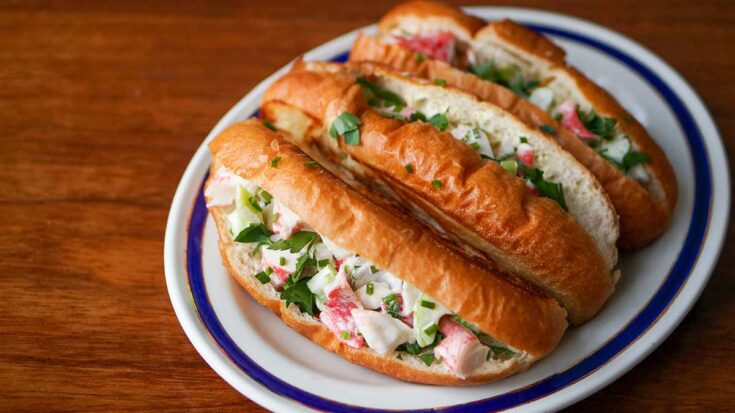 While you may associate lobster rolls with New England, the Canadian province of Nova Scotia is famous for its lobsters.

The main difference between New England and Nova Scotia lobster rolls lies more with the lobster meat than the other ingredients.

Both combine lump lobster meat with butter, mayonnaise, and crunchy veggies in a buttery roll, but Canadian lobster meat is tougher and brinier than New England lobster. 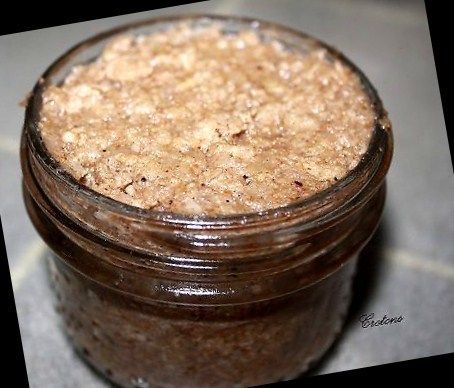 As a form of pate, you know Cretons is a French Canadian tradition.

This pork pate combines ground pork with onion, garlic, and a myriad of spices pan-fried with milk and stock then ground in a food processor to create a thick paste.

This rich dish tastes great on a crunchy crostini. 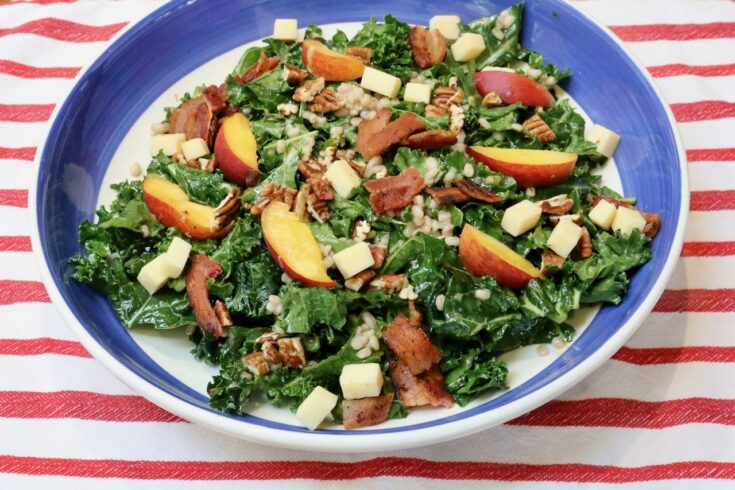 It has hearty kale, peaches, bacon, cheese, pecans, and barley all tossed in a maple and apple cider-infused oil-based dressing.

It may be a side dish salad for a Canada Day cookout, but it's hearty enough to be the main course in my opinion. 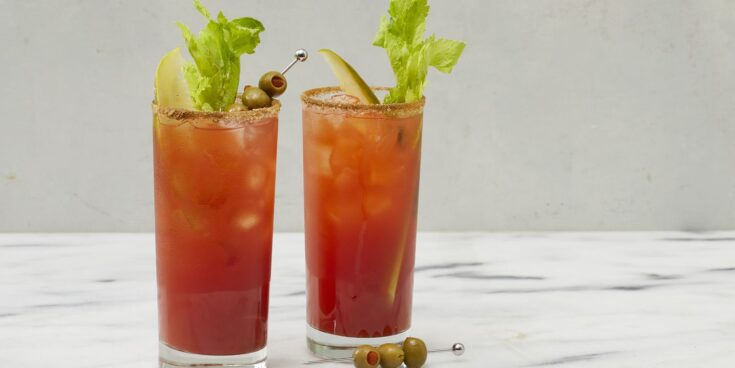 When I was in Canada, I went looking for a boozy brunch to enjoy a stack of pancakes and Bloody Mary.

Much to my surprise, Bloody Mary is an American term. In Canada, they’re called Caesar.

The main difference between the classic Canadian Caesar and a Bloody Mary is that Caesars use clam juice along with tomato juice.

Check out our favorite vodkas for bloodies and caesars! 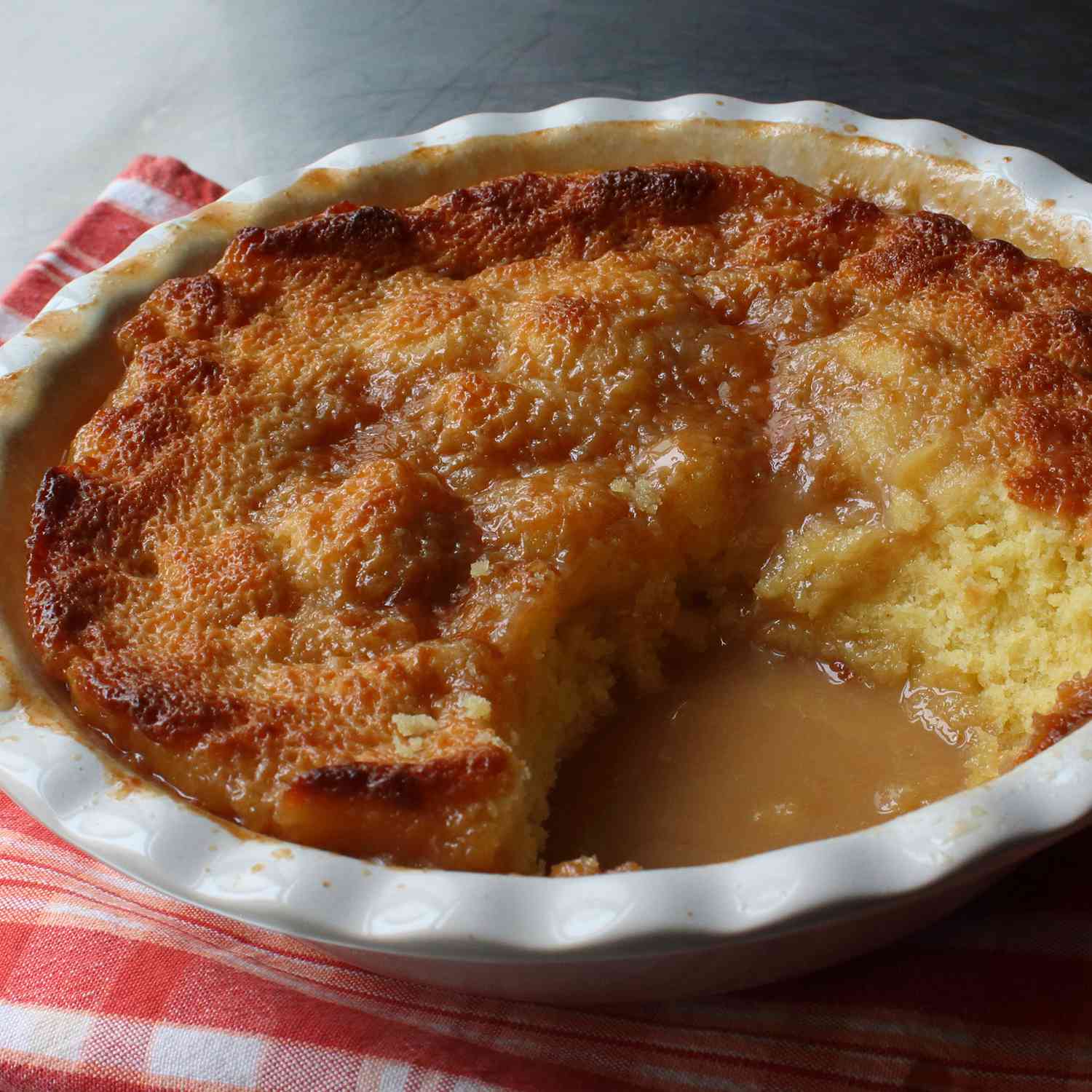 It consists of a chocolate or butterscotch cake drenched in syrup or caramel before being baked.

As the cake bakes, it soaks up the syrup and leaves a thick gooey foundation.

Pouding Chomeur reminds me of the marriage between an upside-down cake and tres leches. 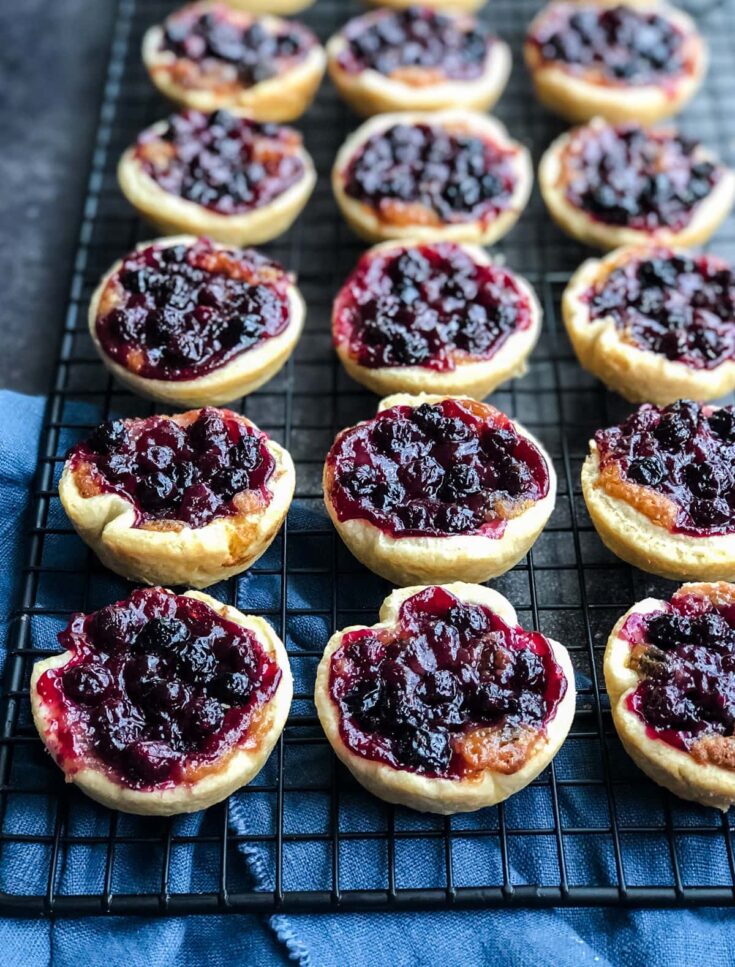 Saskatoon berries are native fruits to the province of Alberta.

They look like blueberries but are less juicy and have a nutty sweetness.

Try these famous Canadian dishes on your next trip up north or make them yourself!

If you’re looking for something quicker, check out these popular Canadian chain restaurants!