If you don’t eat meat, then it is likely that you are always on the hunt for delicious plant-based alternatives for protein. One of the best options available to you will always be tempeh. Tempeh is packed with protein, fiber, vitamins, and probiotics. So, it can not only make up part of a balanced diet, but it can also be extremely healthy too.

You might have heard of Tempeh before, but it is much more likely that you have heard of tofu. Tofu and tempeh both operate in a similar area of the market, and they are incredibly popular in both vegan and vegetarian dishes. But, this type of food isn’t just suitable for vegans and vegetarians, anybody can enjoy it, and that is why so many restaurants are adding it to the menu.

If you haven’t tried tempeh before, then it is likely that you are skeptical about it. But that is going to change today. In this guide, we’ll be taking a look at tempeh, and telling you everything that you need to know about it. So to find out, keep on reading.

Well, let’s begin by taking a look at what Tempeh is. As we have said tempeh is closely related to tofu, and it is very popular among the vegan and vegetarian communities. This is because tempeh makes an outstanding substitute for meat-based proteins, such as pork, beef, and chicken.

Tempeh is able to make such an excellent substitute because it actually contains lots of protein, fiber, and other great nutrients, including vitamins. But what is Tempeh made of?

Tempeh is able to be so full of nutrients because it is made using soybeans. In order to transform the regular soybeans into ‘tempeh’, the soybeans are fermented slightly then cooked.

The fermentation process is incredibly important because it makes the soybeans easier to digest. They can then be flattened and transformed into whatever you wish, and this versatility is a big part of the reason tempeh is so popular. But, it isn’t just soybeans that are used to make tempeh, and that is why it is a lot more flavorful than you might expect.

Where Does Tempeh Come From?

You can now buy tempeh in most grocery stores, but you might be wondering where it came from originally. Tempeh is credited as being first created in Indonesia, in the region of Java. Fermentation is very common in most Asian cuisine, and this explains how tempeh was first created.

There is no knowing exactly when tempeh was first created and this is something that is heavily debated, with possible origins dating back anywhere between a few centuries to a thousand years or more ago.

As well as debate over when tempeh was first created, there is also much debate about where it originated. It is generally accepted that it originated in Indonesia, but the region of Indonesia is something that has come under question.

How it originated is also debated, but a lot of people believe that tempeh was created as a by-product of tofu. While the origin of this great food might not be known, what we do know is that it is delicious and incredibly nutritious. But what does it taste like? Let’s find out.

The potential flavor of tempeh is something that puts a lot of people off trying it. Its name suggests that it might have a strange flavor, but this isn’t actually the case.

In fact, tempeh has a very mild flavor, and this is part of what makes it so versatile. As you would expect, tempeh tastes a lot like soybeans, but it also has nutty and earthy undertones too. This is because other types of beans and grains are usually added to tempeh during the fermentation and baking process.

If you want to compare the flavor of tempeh to something, the closest comparison would probably be mushrooms. But, when you cook tempeh, the flavor of it is often transformed. This is because tempeh is outstanding at absorbing the flavor of marinades and seasonings that are added to it.

This is part of the reason tempeh is so versatile, and why so many people enjoy tempeh when they eventually try it. So no matter whether you want to use tempeh to make Indian, Mexican, or Southern cuisine, it will taste outstanding.

Where Can You Get Tempeh?

While tempeh is of Indonesian origin, you can actually buy it in most grocery stores. That is why it has become so popular. While your local grocery store might not stock it, you can usually pick up tempeh at larger grocery stores, including Trader Joe’s, Costco, and Whole Foods.

Alternatively, you can order it online at Amazon. Most of the time, tempeh can be found on the vegetarian/vegan aisle at the grocery store, so this is the place to go if you want to buy some. 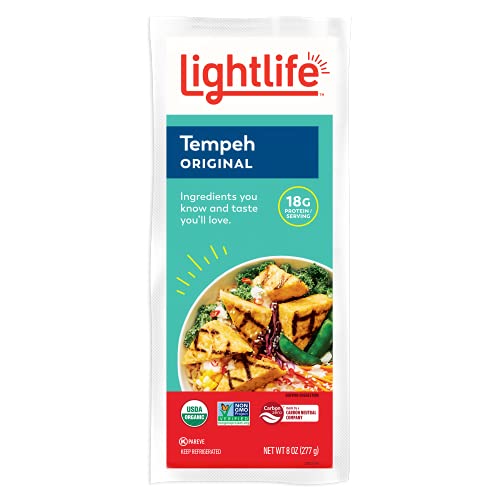 Is Tempeh Good or Bad For You?

Before you try tempeh for the first time, it is likely that you want to find out if it is good or bad for you. As we have said, tempeh is incredibly nutritious, and because of this, it is usually good for you. That is assuming that you eat tempeh in moderation and that it is prepared in a healthy manner.

However, tempeh is incredibly versatile, and for this reason, it is easy to prepare it in unhealthy ways. For example, tempeh can be deep-fat fried, and as you would expect, this isn’t very healthy. But, this versatility also allows tempeh to be prepared in very healthy ways too, and when it is prepared in this manner, you will feel the full benefit of the tempeh’s nutrients.

Tempeh vs Tofu: Which is Better?

Throughout this guide, there is probably one thing that you have been wondering, and that is which is better? Tempeh or tofu? Well, the simple answer is neither.

Tempeh is higher in protein and fiber than tofu, which in most cases would be a benefit. But, it is also higher in calories, which means it is less suitable for those who are following a calorie-counting diet. Tempeh also has the added benefit of being good for gut health, because of all the vitamins and minerals it contains, which is something else that it holds over tofu.

Ultimately, the better option for you will depend on what you want to cook. But what cannot be denied is that tempeh is outstanding, and extremely delicious too. So, if you want to find out more about this delicious ingredient, check out the guide above.

Tempeh is a protein-rich, traditional Javanese food that is delicious and can be served up in countless ways. Tempeh is a great alternative to tofu when you’re just in the mood for something a bit different. Tempeh is versatile and nutritious, so don’t hesitate to start adding this delicious, plant-based meat alternative into your diet.

What’s your favorite way to eat tempeh? Leave a comment down below and let us know!

Rocco is a recent graduate of Florida State University with a Bachelor’s in Editing, Writing, and Media. With seven years’ experience in the restaurant industry as a cook, server, bartender, and more, he is deeply passionate about intertwining his fondness for food with his love of language.