While Norway is famous for its natural beauty and mystical ancient Viking culture, its culinary bounty is lesser known to outsiders. Norway’s bountiful coasts and cold weather dictate a hearty diet of stews, dumplings, meat, and seafood.

Read on to discover all the tasty Norwegian foods you can try at home.

You’ll find a recipe link for each dish, so you can create a Norwegian smorgasbord for your next dinner party. 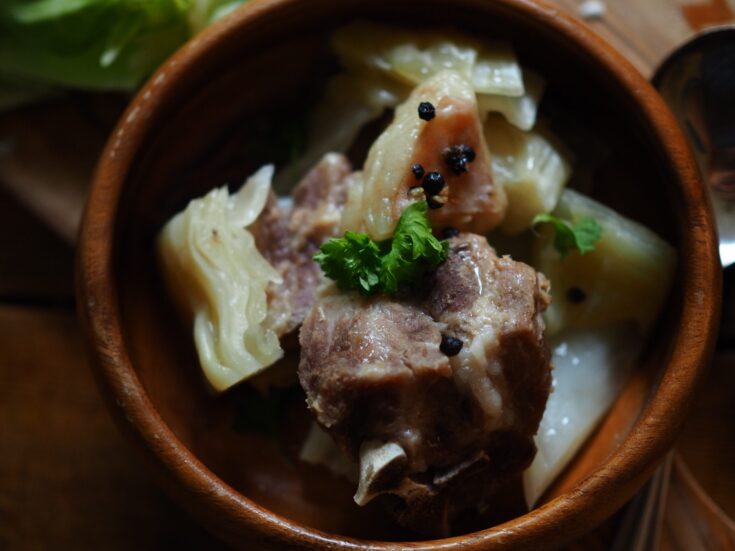 I’ll start with one of Norway’s most prized national dishes, the hearty, slow-cooked lamb, and cabbage stew known as Farikal.

Farikal is a typical autumn dish, comprised of thick chunks of mutton, bone, and cabbage seasoned with a bit of cracked pepper and slow-cooked for hours. 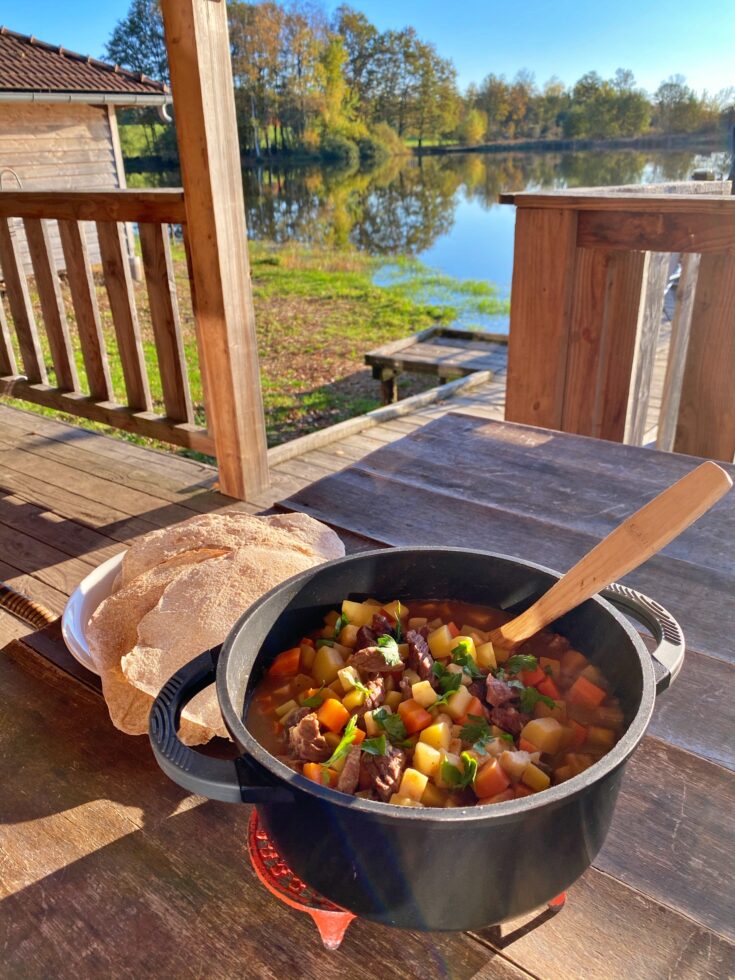 Every cuisine has a savory, one-pot comfort dish, and in Norway, it's Lapskaus.

Lapskaus refers to a meat and veggie stew, but the ingredients you decide to use are customizable because they’re usually a conglomeration of leftover scraps of meat and vegetables.

I like a beef stew, but it’s more important that Lapskaus be filled with as many root vegetables as possible, from carrots to rutabagas to potatoes. 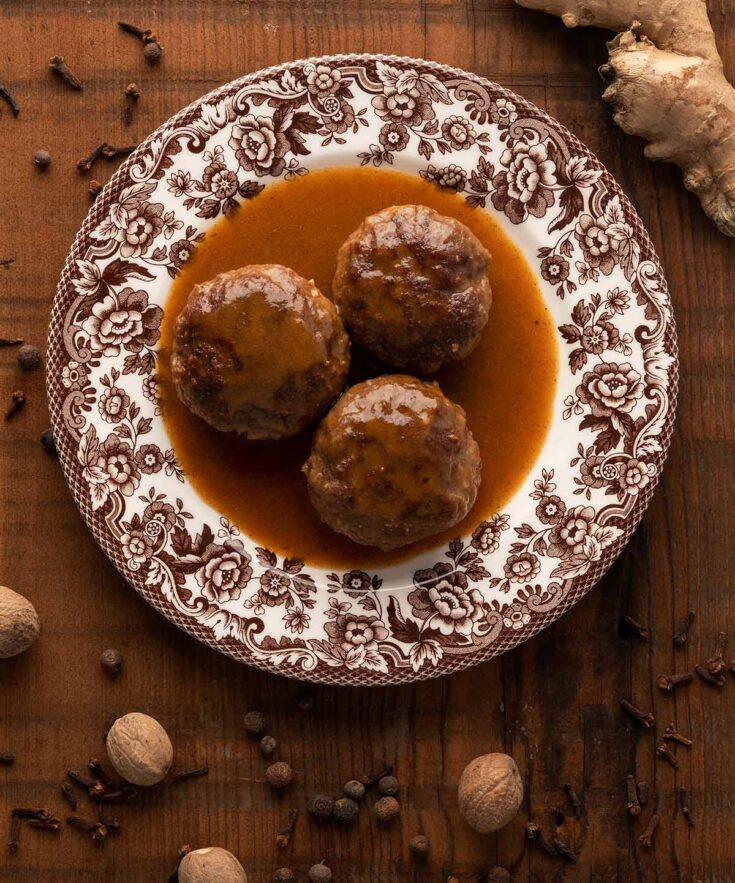 Meatballs are no stranger to any palate as every culinary culture around the globe has a proprietary recipe.

In Norway, Kjiottkaker is the term for meatballs, made with ground meat of any kind formed into balls or flattened meat cakes.

I like to eat Kjottkaker with a diversity of side dishes, from potatoes and lingonberry jam to cabbage and cream sauce.

Brunost can be cow’s or goat’s cheese and comes in various textures, ranging from soft and spreadable to semi-hard.

I enjoy the milder cow’s milk brunost over crunchy flatbread for an afternoon snack. 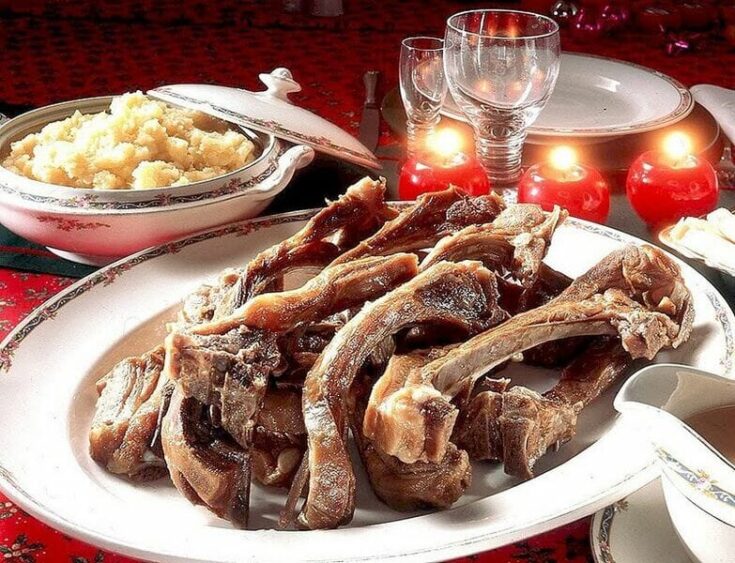 A traditional Christmas dish, Pinnekiott originated and is still most popular in Northern and Western Norway.

Its labor-intensive preparation is worth the effort, especially for a meal as special as Christmas dinner.

I sometimes skip the Christmas ham and serve juicy and flavorful lamb ribs with mashed potatoes and rutabaga.

Not for the faint of heart, Smalahove is quite literally a whole sheep’s head, salted, boiled, and steamed for hours.

Smalahove originated as a peasant’s meal, abiding by the age-old rule of want-not-waste-not.

If you’re feeling like an extra adventurous eater, you can leave the brains in and fry them up for a hearty meal. 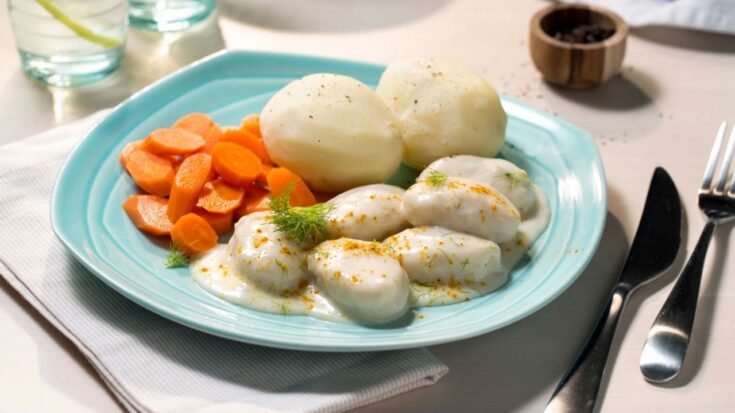 Fiskeboller is a steamed or boiled fish ball that you can make fresh or find canned in most grocery stores around Norway.

Fiskeboller uses potato flour as a binder for the haddock instead of breadcrumbs or wheat flour we use in meatballs.

Bechamel sauce adds a creamy and comforting heft to these flavorful fish balls in my opinion. 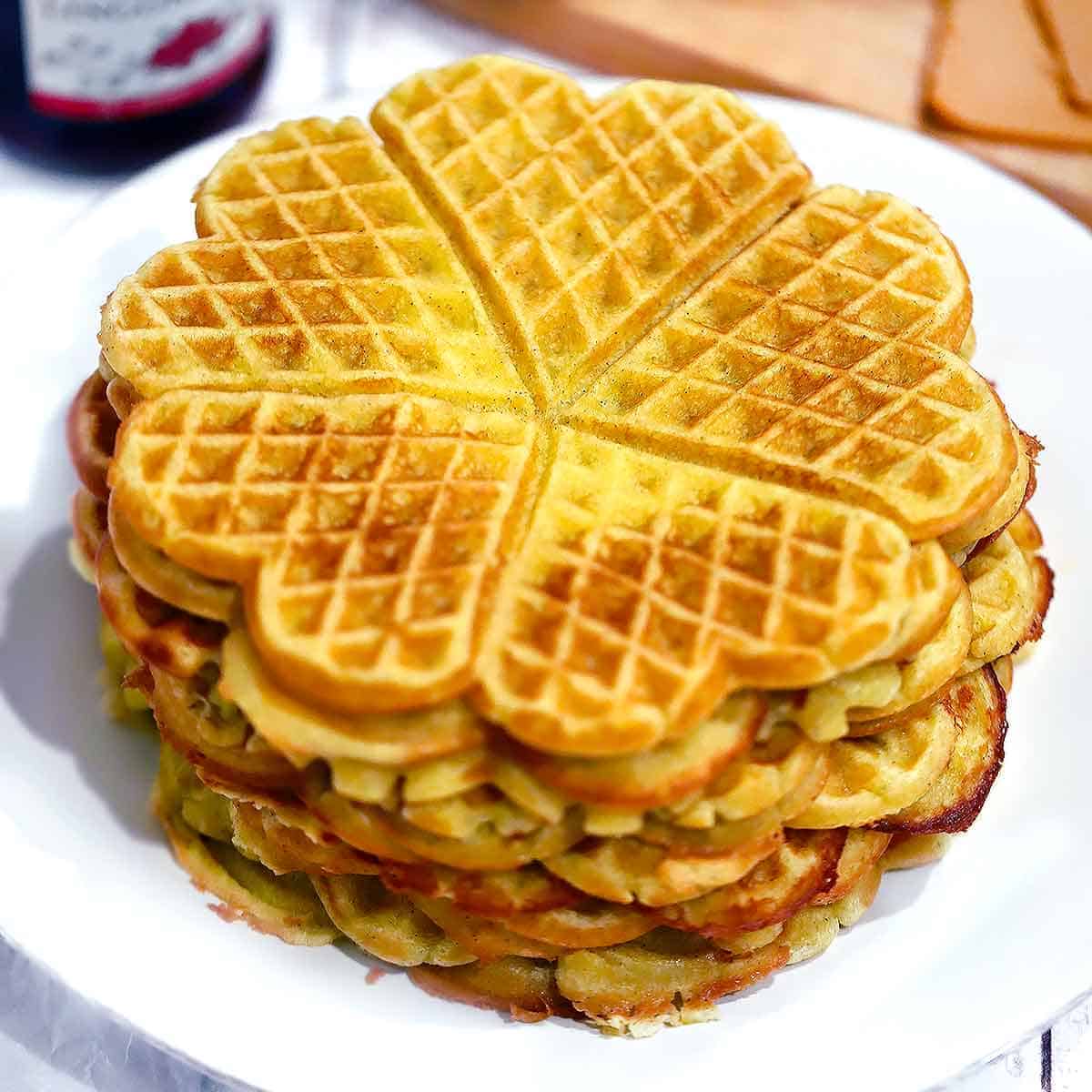 Scandinavia is famous for its incredible waffles, and Norway is no exception.

Vafler are both breakfast foods and desserts, often served with sour cream and jam or even creamy brunost spread.

They may look like Eggo waffles, but they are much sweeter and softer than what we’re used to for our American breakfast waffles. 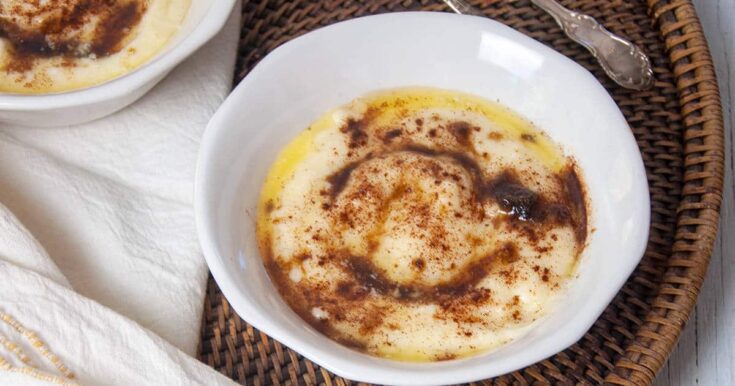 Frigid winter mornings call for creamy, decadent porridge to coax us out of bed, and Rommegrot is the height of sweet dairy goodness.

It’s probably too rich to eat an entire bowl of, but I love to have a small cup sprinkled with cinnamon alongside a plate of crisp bacon. 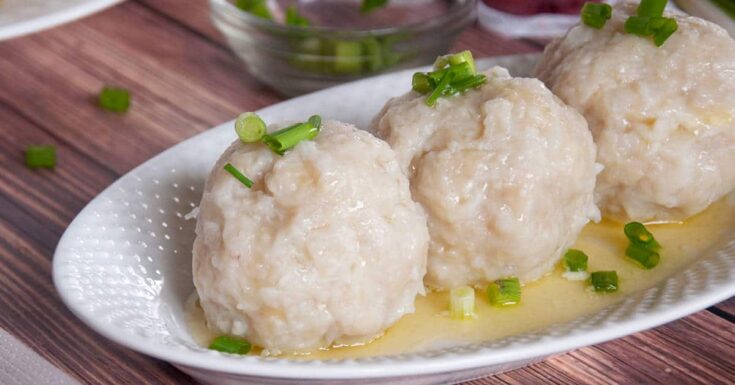 Potato dumplings are a widely cherished comfort food across Europe, and even within Norway, every region has its Raspeball recipes.

Raspeballs are popular restaurant dishes. They consist of grated potatoes and flour, often combined with some form of meat, sour cream, and other root vegetables.

I prefer grinding the potatoes for a more meatball-like texture.

Lefse are delicious griddle cakes that look like Roti, using either wheat or a mixture of wheat and potato flour, milk, or cream.

I’d liken their usage to a French crepe as Lefse can be savory or sweet, served rolled into cylinders around whatever filling you’d like.

I prefer the savory variety with beef and mustard. 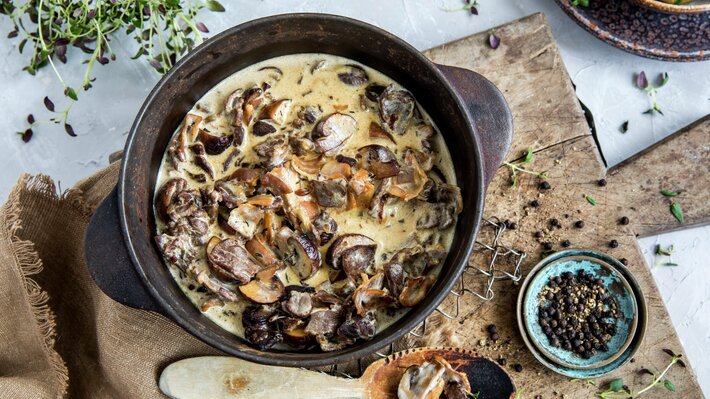 Scandinavia, like most snowy winter lands, is full of reindeer.

While they may be beautiful to look at or romanticize as Santa’s sleigh bearers, reindeer are also a prized delicacy.

Finnbiff is a thinly sliced reindeer steak that’s sauteed in its fat, cream, butter, and beer.

I personally find it gamey and an acquired taste, but the beer and cream add wonderful complexity. 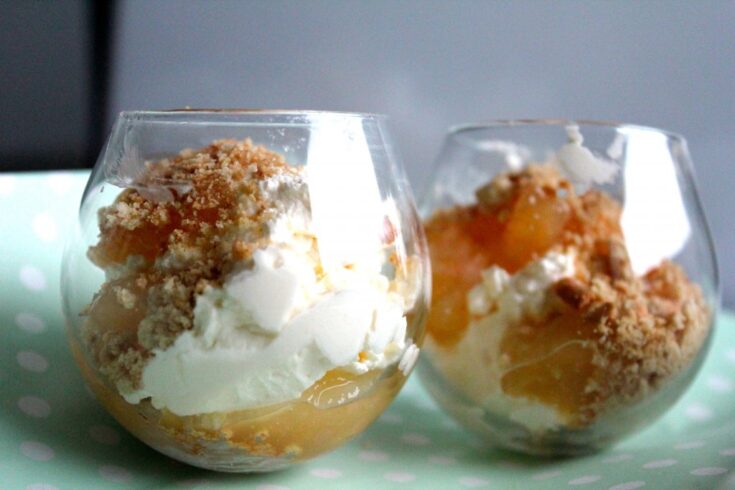 A famous dessert across all Scandinavian countries, Tilsorte bondepiker is a sort of parfait-style layered pudding that starts with a layer of mashed fruit, followed by double layers of whipped cream and biscuit crumbs.

Depending on the time of year, the mashed fruit can be apples or plums.

I love the myriad of textures involved in this dish. 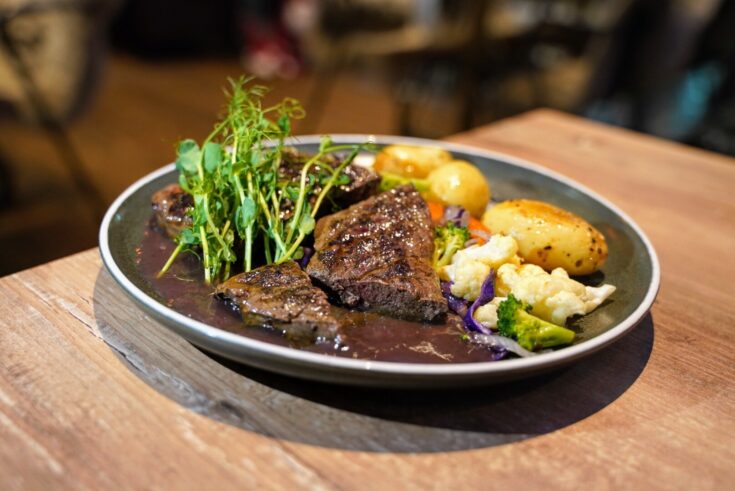 Despite harsh rebuffs from every environmentalist and animal rights group on earth, Norway is one of the few countries that continues to hunt and eat whales.

You can find whale meat for sale at local fish markets to be cured into jerky or steamed and served with potatoes and veggies. 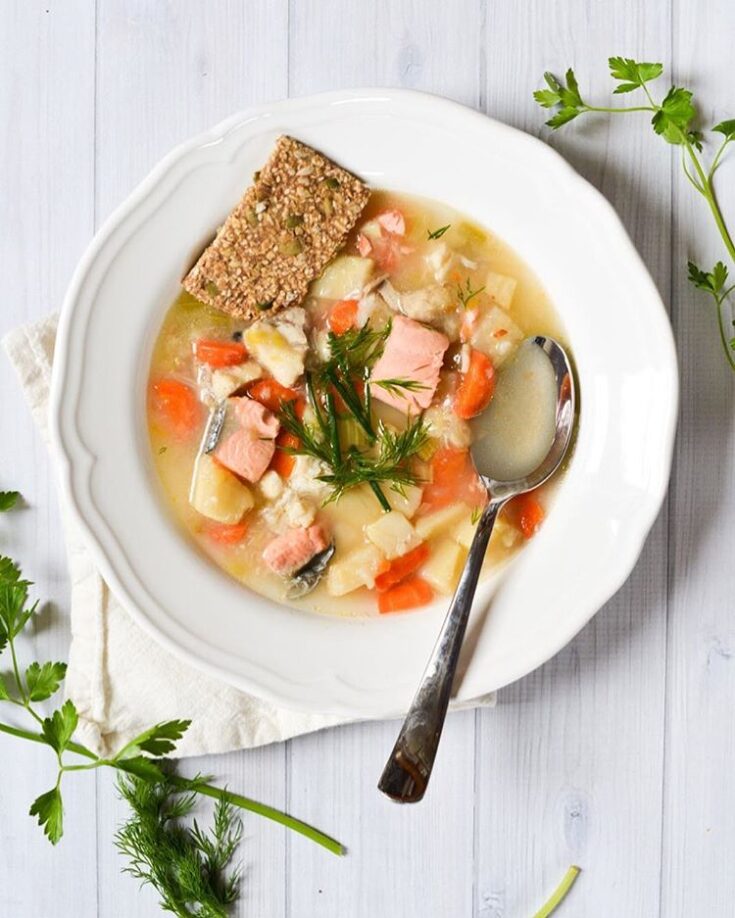 Named for the historic west coast fishing port of Bergen, Bergensk Fiskesuppe is a creamier version of the milk-based Fiskesuppe, using heavy cream instead of milk.

It’s full of the many fish varieties native to Bergen’s coast along with chunks of root vegetables and onions.

I think the cream works beautifully with the saltiness of the fish. 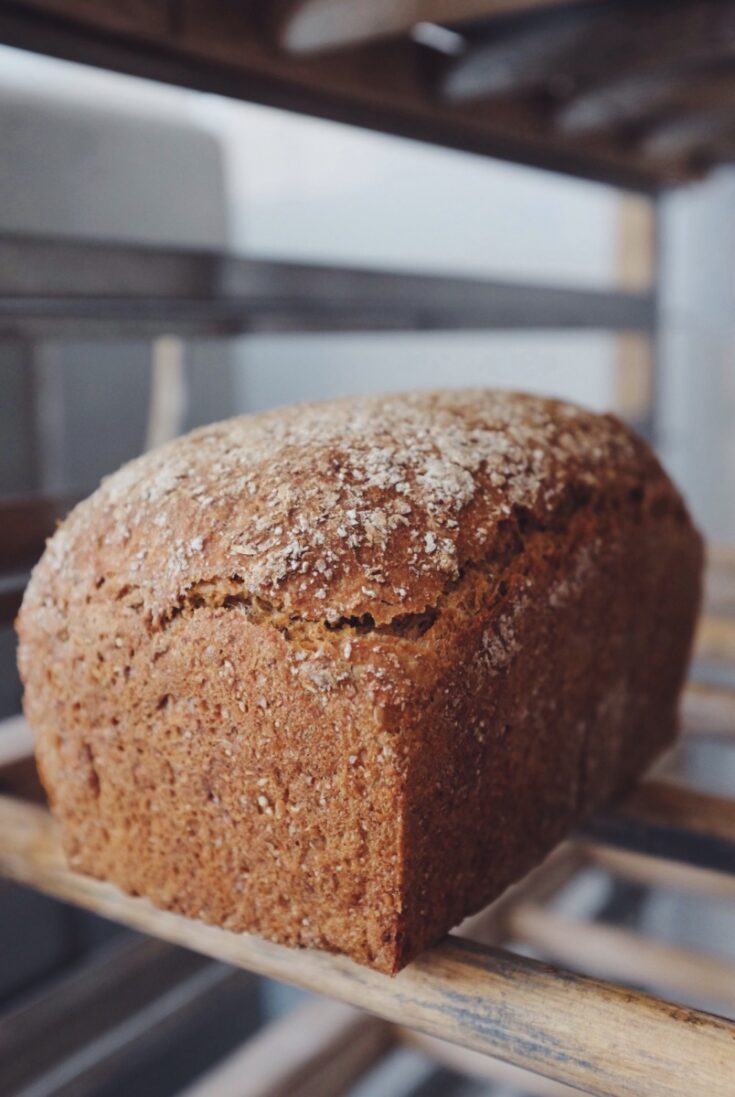 Grovbrod is a blanket term for any thick, coarse bread that contains a ratio of 50% or more whole wheat, grain, or bran flour to white flour.

If you like thick, dense, whole-wheat bread, the traditional grovbrod will be your new favorite recipe.

I think Grovbrod tastes wonderful topped with jam and brunost. 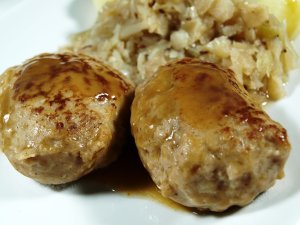 Another Christmas specialty, Medisterkaker is a fatty, flavorful pork meatball that accompanies various other pork dishes on the Christmas table.

I love Medisterkaker with brown gravy over mashed potatoes with lingonberry jam.

Norway’s culinary traditions display a variety of stews, patties, and baked goods that will stick to your bones and keep you warm during those interminably long Nordic winters.

If you’re looking for an authentic Norwegian culinary experience to comfort your belly this winter, try a recipe from my list of Norwegian foods.

Learn about other foods from around the world, like traditional Bosnian dishes!