The New York Sour was first developed in the middle of the 19th century. It is thought that the mention of the recipe in Jerry Thomas’ famous Bartender’s Guide is the first reference to it.

In all of these years, this drink has remained popular. It is one of the great cocktail recipes of all time. There are lots of different styles out there. The most revered is probably the New York Sour.

There are a lot of great sours out there. The basic recipe is a spirit with sugar and citrus juice. Sometimes egg white can be included too.

This is the foundation of some of the most well-known cocktails in existence. Although they seem so different, the sours family includes the Whiskey Sour, the Daiquiri, and the Pisco Sour. There is a sour for every occasion.

The New York Sour is essential a whiskey sour with the addition of dry red wine on top.

This particular recipe takes the classic list of ingredients, using whiskey, simple syrup, and lemon juice and adds a red wine float – poured slowly into the drink along the back of the spoon to create a layer at the top of the drink.

This adds a deep color as well as more layers of aromatic flavor to the drink. This variation can be seen as far back as the late 19th century, although occasionally it is given a different name. One example is the Continental Sour.

You’ll find our recipe below. Besides the cocktail ingredients, you’ll also need a cocktail shaker with fresh ice to make it cold and a rocks glass or an old fashioned glass to drink out of! 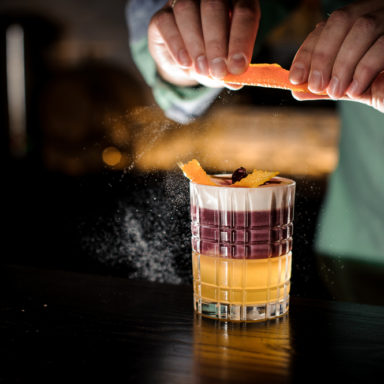 Ryan F.
It is one of the great cocktail recipes of all time. There are lots of different styles out there. The most revered is probably the New York Sour.
Print Recipe Pin Recipe
Total Time 4 mins
Course Drinks
Cuisine American
Servings 1 person

There is a possibility that the variation was actually first seen in Chicago. Once the New York name was appended to the recipe though, it stuck.

Our recipe is based on the version made by the co-founder of the New York Distilling Company, Allen Katz. He is a world-renowned expert in spirits and recommends using either bourbon or a rye whiskey as the base to your drink.

Using a rye whiskey will give a more noticeably spiced aroma to the final cocktail than using bourbon. It is up to you to decide which you prefer. If you prefer bourbon whiskey, that may be more to your tastes.

Adding simple syrup and lemon juice that has been freshly squeezed helps to balance the drink.

The egg whites add a froth to the final drink and a thicker, smoother mouthfeel.

Adding the red wine slowly to the top gives a real wow factor in the presentation as well as bringing fruit notes to the overall taste.

Eating raw eggs can be a risk factor for food-borne illnesses.

While egg whites are a common addition to many essential cocktails to give them a frothy, silky texture, you should take caution.

Although it is really easy to make, this drink looks hugely impressive and boasts a great complexity of flavor. This is definitely a great choice whether you are mixing drinks for a crowd or a more intimate occasion.

Ryan is a local foodie who enjoys checking out the area's restaurant scene every chance he can. Ryan also enjoys traveling and checking out local eateries in every city he visits.