Philadelphia may be known for their cheesesteaks, but it’s no secret that good food is everywhere in the city. That being said, donuts are no exception. We’ve compiled a list of all of the famous donut shops in the city, so that you can try the best donuts in Philly.

Whether you’re looking for gourmet flavors, or deep fried classics, Philadelphia has it all; from Reading Terminal Market (Beiler’s Donuts), to fried chicken and donuts (Federal Donuts), to vegan donuts (Dottie’s Donuts).

Some specialty donuts that you mind not find elsewhere include the Fruity Pebbles chocolate donut and the caramel apple donut. This family owned business makes some of the best donuts in Philadelphia. Aside from their Reading Terminal location, Beiler’s has one more location in Philadelphia, as well as a location in Lancaster.

Reading Terminal Market is an essential destination to visit while in Philadelphia. When you walk into the market, you’re surrounded by countless food stands and restaurants. We recommend checking out Reading Terminal for dinner or lunch, and stopping at Beiler’s for dessert. 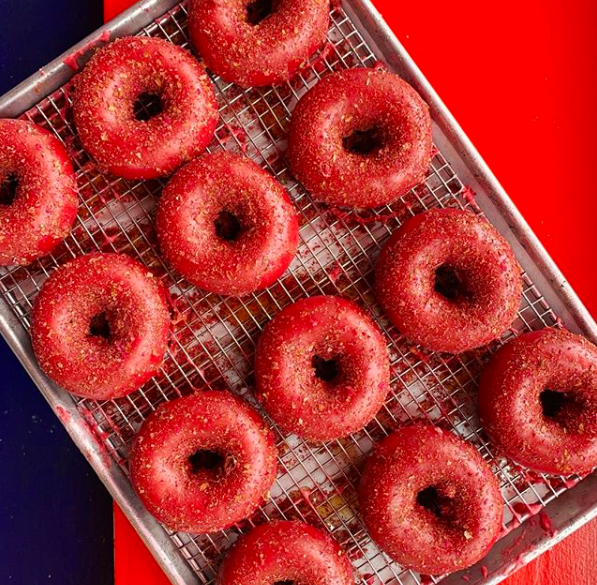 Federal Donuts have debatably the best donuts in Philadelphia, but they’re far from a traditional donut shop. In a flawless execution of mixing sweet and savory, Federal Donuts specializes in serving both donuts and fried chicken.

Federal Donuts is known for classic donuts in unexpected flavors. Their gourmet donuts come in flavors like Irish Potato, Grapefruit Brulee, and Blueberry Cheesecake. They also serve fried chicken with a number of flavors of seasoning, and even serve breakfast sandwiches.

Federal Donuts are a staple in the Philadelphia donut market. Stop here when you want to bring the office something special. There are multiple locations from Fairmount to South Philly and more. 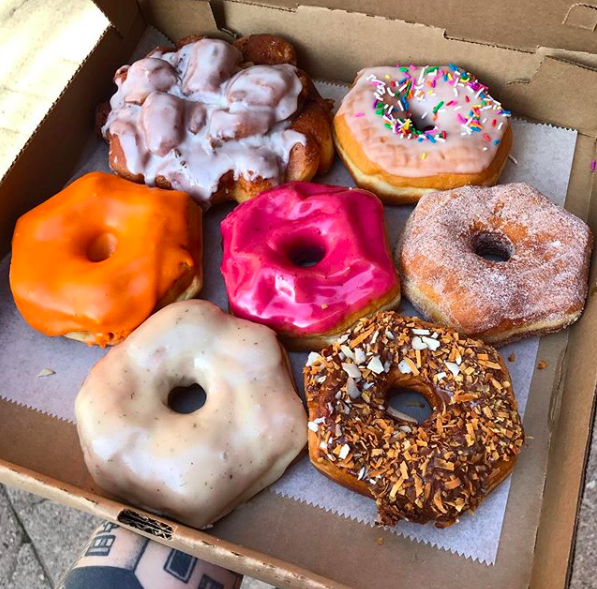 The taste might fool you, but Dottie’s Donuts are a 100% vegan donut shop. Dottie’s Donuts is located in Cedar Park, West Philadelphia with a second location in South Philly.

Their menu of all vegan donuts include flavors such as Blueberry Maple, Almond Joy, Apple Fritter, Lemon Poppy, and many more. Their price point is shockingly low for such a high-quality vegan donut shop.

Follow Dottie’s Donuts on Instagram for a mouth-watering showcase of their donuts and baked goods. Whether or not you’re vegan, stop by Dottie’s Donuts next time you’re in West Philadelphia. You won’t regret it. 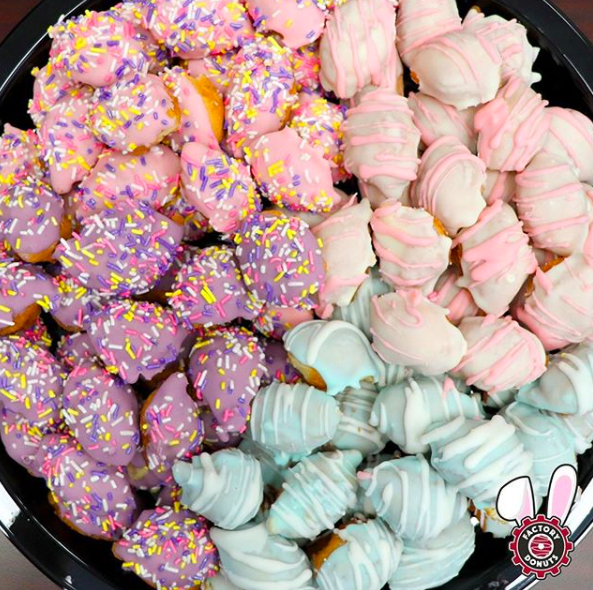 Factory Donuts takes pride in serving fresh donuts daily. They’re easily the best donuts you can find in the Mayfair area. They also have locations in the Philadelphia suburbs, including Media, Newtown, Doylestown, and Turnersville, NJ.

Factory Donuts’ special flavors include Maple Bacon Explosion, Chocolate Coconut Dream, and Vanilla Factory. Factory Donuts also does donut nuggets, similar to Dunkin Donut’s munchkins. Like a few other donut shops on this list, Factory Donuts is a family owned establishment, and they have several locations around Pennsylvania and Florida. 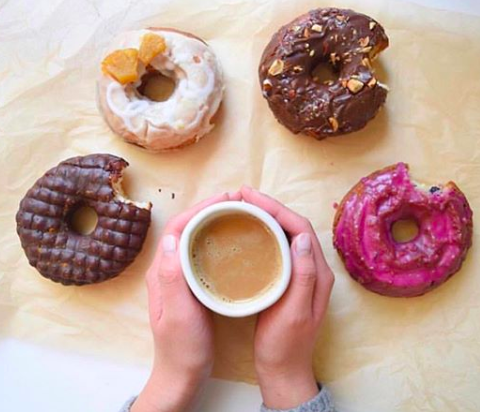 Hello Donuts is a new donut shop in Philadelphia that was made by donut lovers, for donut lovers. Three coffee shop loving musicians had a dream to open one of their own, and it’s delicious.

Hello Donuts has catering available for all of your special events. Their specialty flavors include but are not limited to Milk & Cookies, Blueberry Filled, and Banana Pancake. They even have a selection of Vegan flavors, including Chocolate Tahini and Raspberry Rose.

If you’re looking for fresh donuts in the Kensington area we highly recommend this classic donut shop. Order on their website for delivery or pickup.

Frangelli’s is an old-school Italian bakery with excellent donuts that are made fresh daily. They pride themselves in their dedication to hand cutting every single donut. This staple of south Philly has been open through two different locations since 1947.

Try their ice cream donut; ice cream of your choice between a sliced donut. The staff is welcoming and helpful, and they offer a signature pastry. The frannoli is a type of donut that has a cannoli cream filling. It’s their own invention and has been their signature for decades. 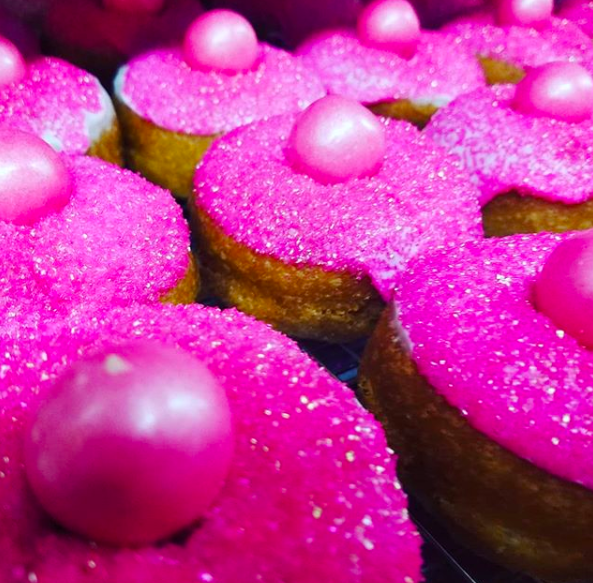 Keep your eye out for Undrgrnd Donuts, a donut cart on wheels that shows up to various street festivals and other events around Philadelphia. Undrgrnd Donuts is always a special occasion because you can’t just go to their store and try it.

The least traditional donut they serve is the Homer. You’d think it’s a donut with pink frosting and sprinkles, but it’s even more unusual. The Homer is covered with vanilla glaze, raw sugar, and chocolate covered bacon chunks. 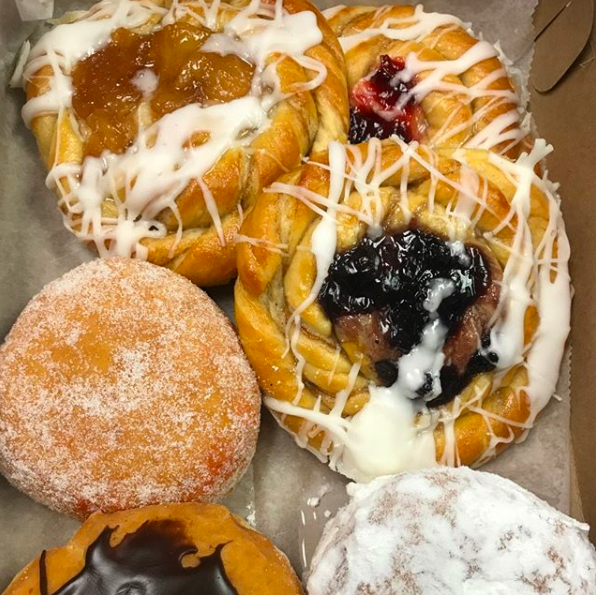 Lipkin’s Bakery is a kosher bakery that’s been in Northeast Philadelphia since 1975, plus another location in South Philly. Their motto is consistency and quality, and they deliver just that.

They aren’t known just for their donuts – they serve pies, cookies, cakes, pastries, and just about anything you could expect from a bakery. Check out either of Lipkin’s Bakery’s locations, in South Philly or in the Northeast. 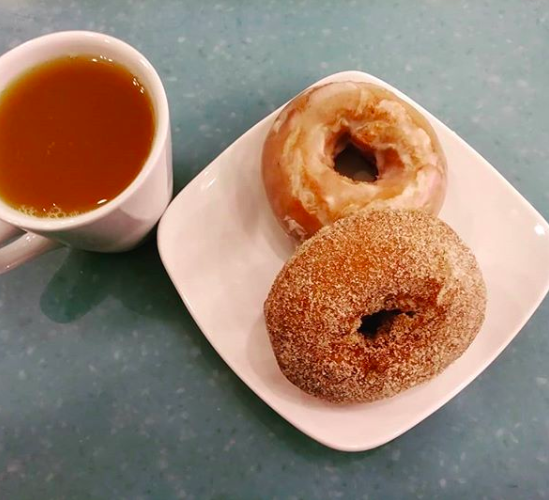 This coffee bar in Kensington has a serious dessert menu. Their chef, Melanie Diamond-Manlusoc is known for baking at Michelin-starred restaurants for years.

Though Flow State Coffeebar is known for all of their baked goods equally, there’s nothing like their fresh cider donuts. With their menu available on GrubHub and Caviar, you don’t even need to leave your home for fresh-baked goods. Their menu consists of everything from their famous gelato, to egg wraps, and of course, their cider donuts.

Philadelphia is home to plenty of great donuts! The food scene in Philly is constantly evolving, so visit these donut shops or check out Philly’s best pizza, sushi, and more.