Many describe Argentina as a European nation in South America owing to significant Italian and German immigration during the Second World War. Like Italy, Argentina is famous for its incredible cuisine.

While you’ll see many Italian influences in their bakeries and pasta dishes, Argentina has a unique culinary culture.

Argentina is known for its gaucho culture characterized by ranching and some of the highest quality beef in the world.

Their dairy production contributes to a beautiful confectionary bounty, with custard-stuffed cookies and a particular type of caramel.

Read on to explore tantalizing descriptions of some of the most popular Argentinian foods. 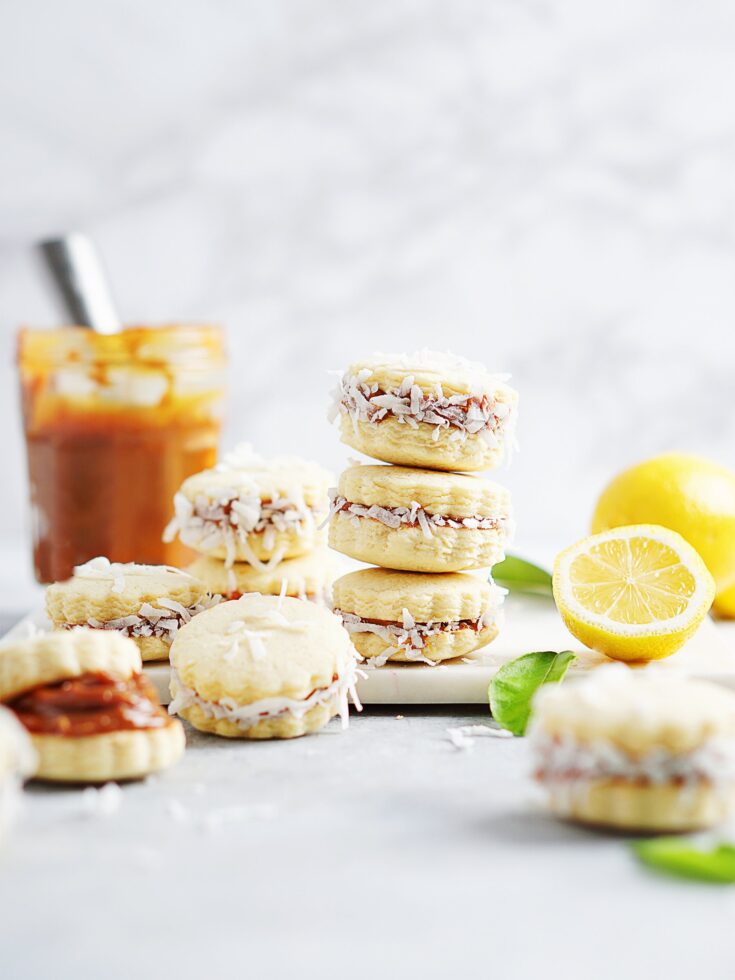 Alfajores are a culmination of Argentina’s fine dairy and confectionary traditions, and they are the best bite-sized desserts I’ve ever tasted. While they originated in the Iberian Peninsula during the Moorish occupation of Spain in the 8th century, Argentinians perfected the recipe.

Alfajores are two soft, crumbly butter cookies made with flour, honey, and almonds. Sandwiched between the cookies is a thick dollop of dulce de leche.

Some varieties have shredded coconut patted onto the dulce de leche. Other variations dip the entire cookie in melted chocolate.

You’ll find a myriad of varieties on display in any confectionary shop or bakery in Argentina. I liken their tantalizing display cases to a Parisian bakery’s display of macarons. 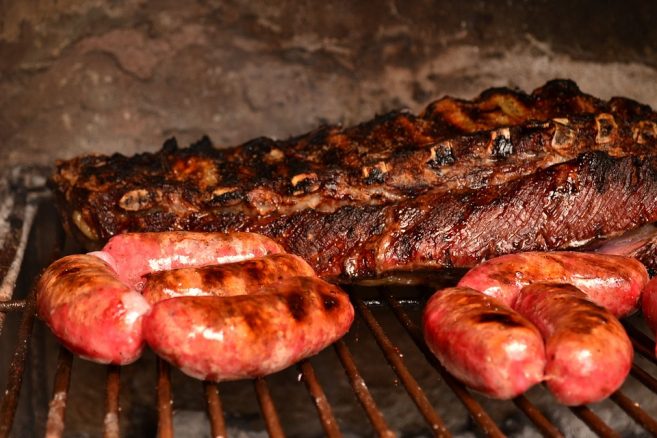 Asado is Spanish for “grill” or cookout, and Argentina’s world-famous red meat culture really shines through this notable tradition.

Asados are the benchmark of Argentinian social traditions. Weekend cookouts with the extended family or block party cookouts are a weekly occurrence in Argentina.

Asados are, in essence, a celebration of their meat. Every household has a grill pit, throwing a combination of coal and fire to ignite and grill the following meat over an open flame: beef, pork, chicken, chorizo.

Every family or group of friends has a designated grill master who mans the grill and cooks the meat. As meat comes off the grill, it’s devoured in quick succession by the rest of the party.

There’s usually a variety of salads, sauces, veggies, and bread to accompany this meat fest. I love this prized tradition because it unites everyone over food. 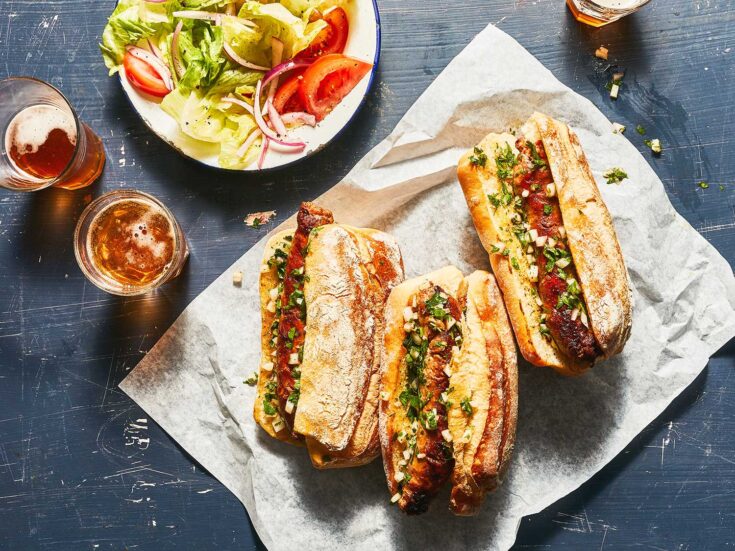 In the US, we have hot dogs and pigs in a blanket. These tasty handhelds pale in comparison to choripan. Choripan is a name invented by Argentinians, describing its two main ingredients: chorizo and bread (pan in Spanish).

Chorizo in Argentina is akin to bratwurst, a thick sausage of either beef or pork. Chorizo is almost twice the size of your average hot dog, so they’re often sliced down the middle before being grilled. As for the bread, choripan uses crusty bread like a baguette or white roll.

Choripan usually gets a big slather of chimichurri and a garnish of diced tomatoes and onions. I’ll take a Choripan over a hot dog any day. 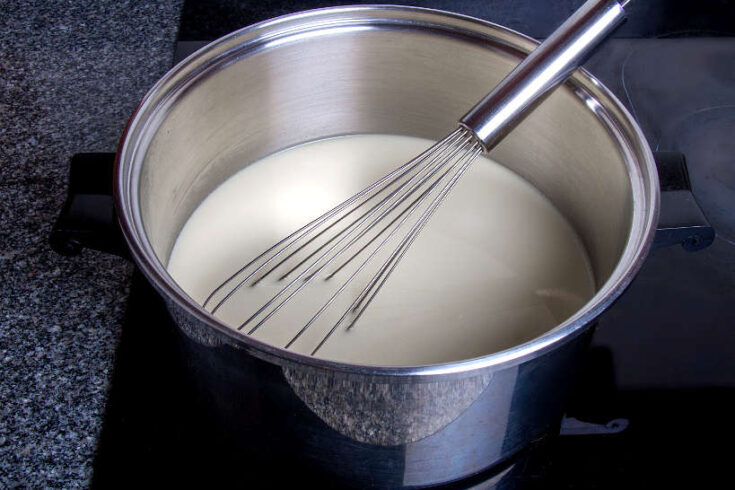 I bet you were probably wondering about dulce de leche from my description of alfajores.

Meaning “sweet from milk,” Dulce de leche is caramelized milk made by slow-cooking sugar and milk in a pot until it thickens into a light brown caramel.

Dulce de leche is incredibly sweet and rich, with a texture similar to hot fudge or caramel sauce you’d see at ice cream shops. Argentinians use it to make a range of different confections, most notable of which are alfajores.

Dulce de leche is a global sensation, and you’ll see it as an ice cream flavor, an M&M filling, or a dipping sauce for donuts and cookies. I’ll just eat it by the spoonful if no one’s looking. 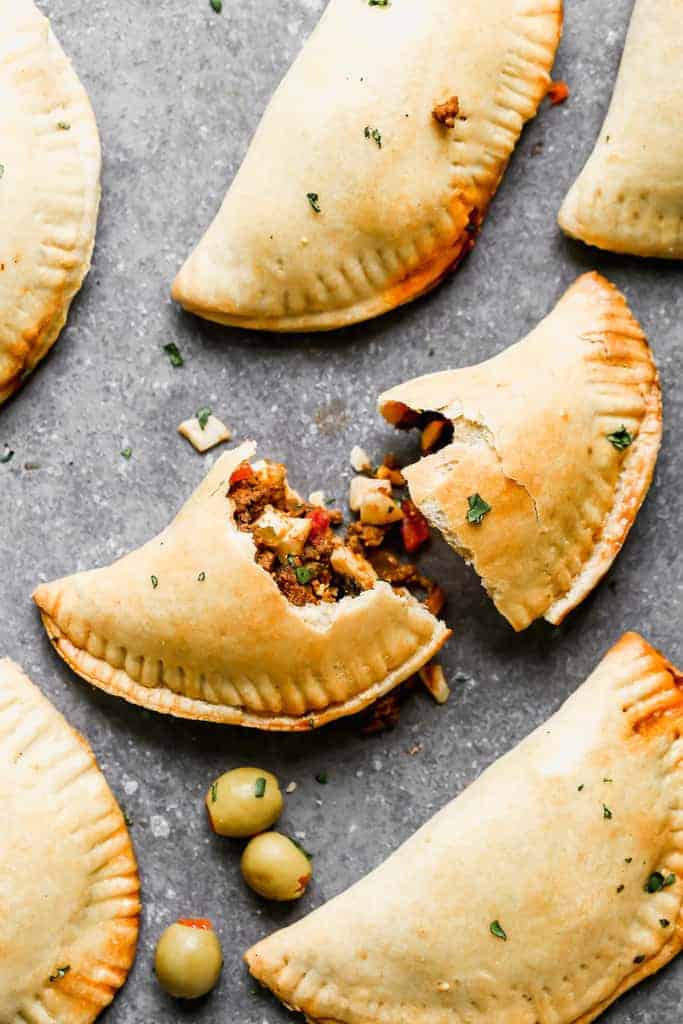 Empanadas are a Latin American staple, with each nation having a specific recipe and cooking method. In Argentina, empanadas use a hearty wheat-flour-based dough stuffed with sweet and savory fillings, then baked.

There are numerous varieties of fillings, but the most typical include: Ground beef, Onion, Green olives, Hardboiled egg, Spice mixture.

They’re the perfect afternoon snack or quick lunch on the go. I like to add raisins to the filling to complement the salty, umami flavor of the green olives. 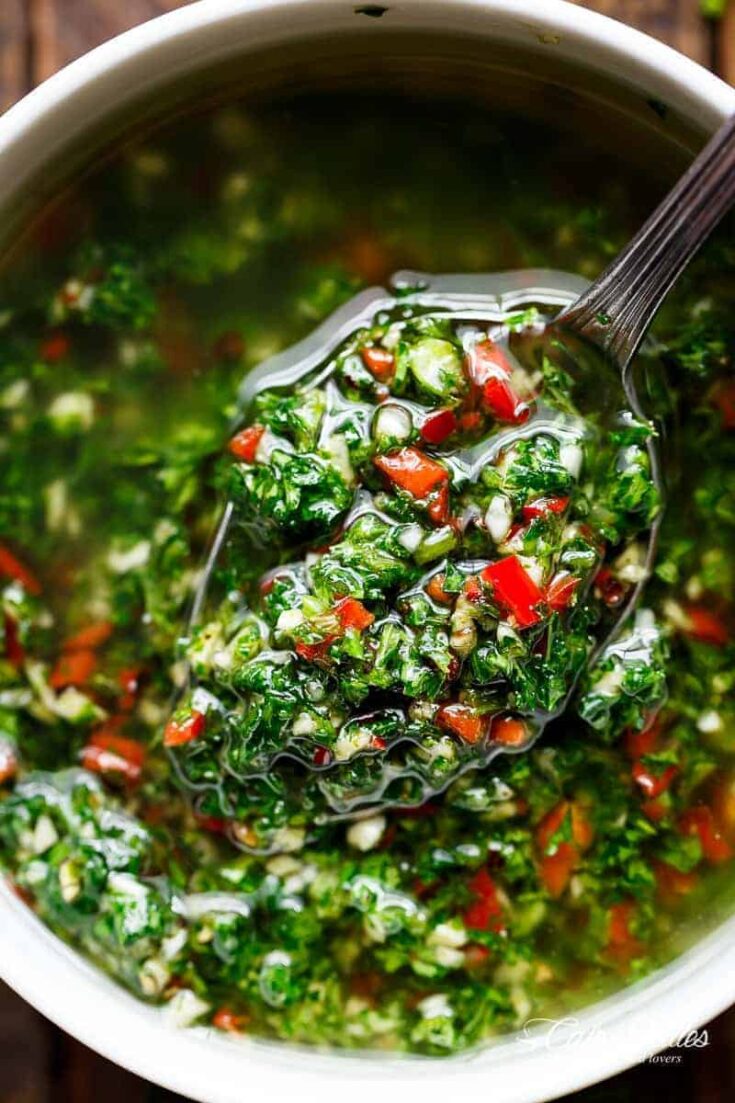 Chimichurri is the height of flavor and tastes amazing on anything from meat to vegetables to bread. It consists of the following ingredients: Sherry or red wine vinegar, Fresh parsley, finely chopped, Dried oregano, Red pepper flakes, Garlic, Olive oil.

No household in Argentina is complete without it. It’s the main condiment to drizzle over asados and choripanes or as a dipping sauce for empanadas. I serve it with fresh bread instead of olive oil and balsamic dipping sauce. 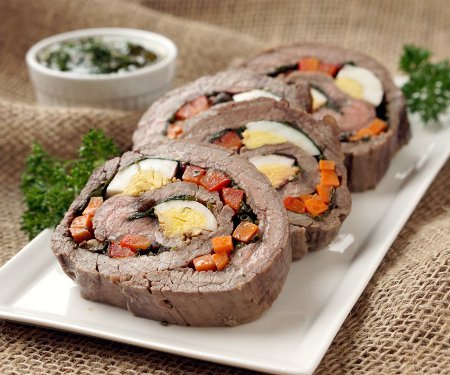 Matambre Arrollado is a stuffed beef dish that is labor intensive and stunningly presented in thin slices to reveal a sort of Yule Log-like roll of meat and filling spirals.

Matambre uses a thin garlic and herb marinated flank steak, placing the following ingredients on top before rolling it into a cylinder and grilling over a hot flame: Hardboiled eggs, Diced red and green bell peppers.

The beef marinade has all the ingredients involved in Chimichurri except vinegar and keeps the thin flank steak moist and juicy, imparting the fresh herb and garlic flavors into the veggies and eggs. The thin slices of Matambre Arrollado are veritable works of culinary art. 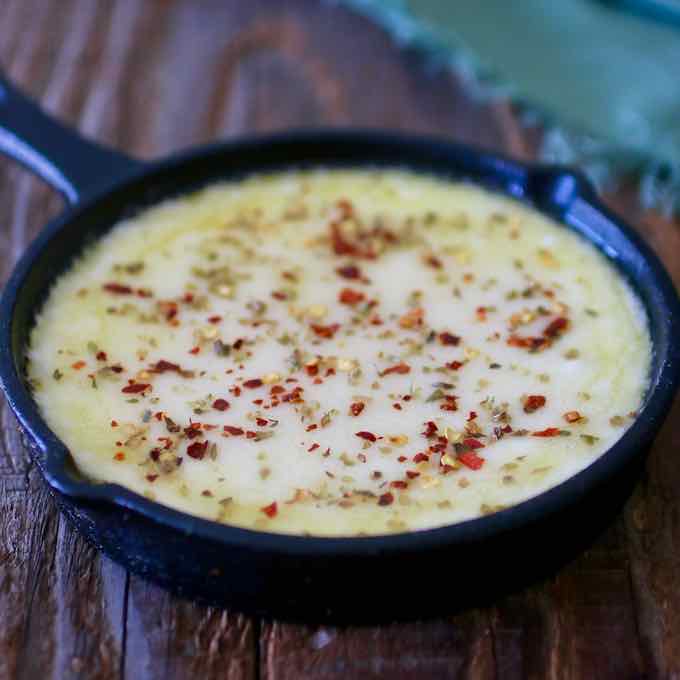 Provoleta is a pulled-curd provolone cheese with the same semi-hard texture, sliced into thick rounds or squares to be grilled with asado or in a cast iron pan.

It has a mild, somewhat smokey flavor that tastes perfect when paired with meat or slathered with chimichurri. I’d liken it to the Greek Haloumi.

Argentinians also make provoleta rellena, or stuffed provoleta, with beef, chicken, chorizo, or chimichurri. I love it with chimichurri on an open-faced crusty bread sandwich. 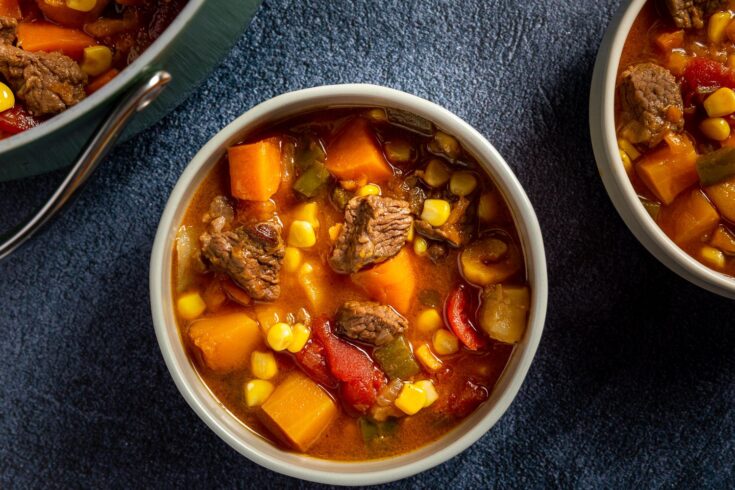 Whether it's Key Wat in Ethiopia or Texas chili in the US, every culinary culture has a hearty beef stew. Carbonada, or carbonada criolla, is Argentina’s version of beef stew and is beloved comfort food for those cold winter months.

The richness and complexity of this stew get better the longer it sits. I love using sweet potatoes, corn, and apricots to make this stew sweet and savory. 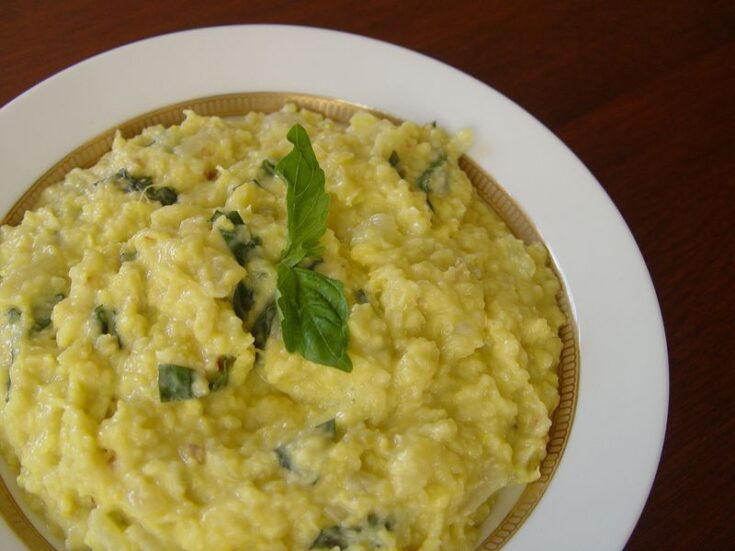 Unlike most South American countries, Argentina has a notably small indigenous presence. However, prehispanic influences still exist in the Argentinian Andes.

Humitas are a remnant of pre-hispanic cultures. You may have heard them referred to as tamales in Central America. In the South American Andean regions, they are called humitas.

Humita is a Spanish term that refers to steaming or humidity, thus describing the typical cooking method used in preparing these well-known corn masa dumplings.

Humitas are simpler in Argentina, consisting only of pounded yellow or white corn into a creamy masa wrapped in a corn husk and steamed.

I think they taste like firm corn pudding and are as rich and comforting as their Mexican counterparts. 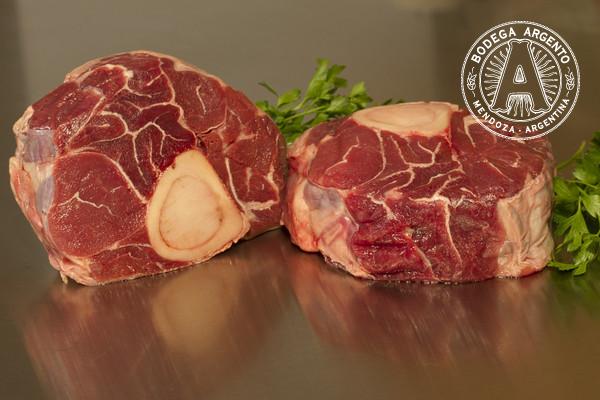 Another pre-Hispanic Andean culinary tradition, locro, is prevalent in all Andean countries and is only a regional dish in Argentina.

Nevertheless, locro is one of Argentina’s national dishes, often served on May Revolution Day. It’s made with the following ingredients: Beans, Corn, Potatoes, Squash, Pumpkin, Onion, Beef or chorizo.

It’s a popular winter dish and is often served with a spicy red sauce made with paprika and roasted red pepper. If you’re wondering why Argentinians eat locro in May, consider that Argentina is in the southern hemisphere. May is a winter month! 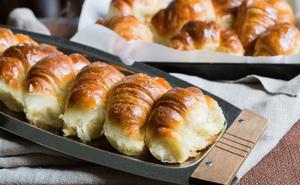 Meaning “half-moon” to describe their shape, medialunas are a popular Argentine baked good that's a cross between a croissant and brioche.

It’s shaped like a croissant, but the yellow, rich, dense dough tastes and feels more like brioche.

Every bakery and coffee shop sells medialunas, and they are the perfect subtly sweet roll to enjoy with a hot cup of coffee or mate in the mornings or late afternoons. The ingredients consist of: Whole milk, Active yeast, Flour, Sugar, Honey, Salt, Eggs, Butter, Vanilla.

Like brioche, medialunas receive a brush of egg wash, creating a shiny, deep brown outer crust. It’s hard just to eat one of these perfectly fluffy morning rolls, especially if they’re fresh out of the oven. 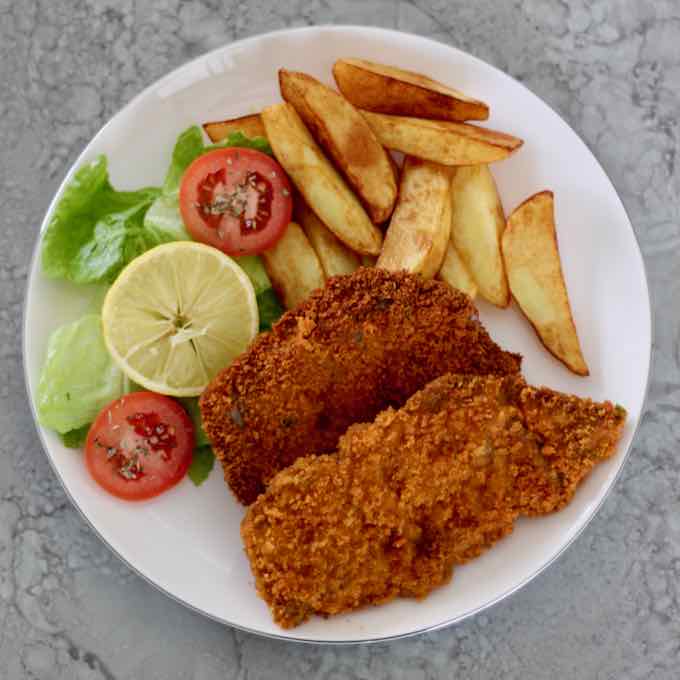 A direct descendant of Italian culinary tradition, milanesa is a breaded and fried meat dish. It is the Argentinian take on veal milanese or wiener schnitzel. The meat varies from veal to round steak to chicken.

More important than the cut of meat is the cooking method, involving pounding a cut of meat into a thin mass, breading it, and frying it.

Milanesas are usually massive, taking up an entire plate due to their expansion upon being pounded. Anything breaded and fried is going to be delicious, so I don’t need to expand upon the decadence of this dish. 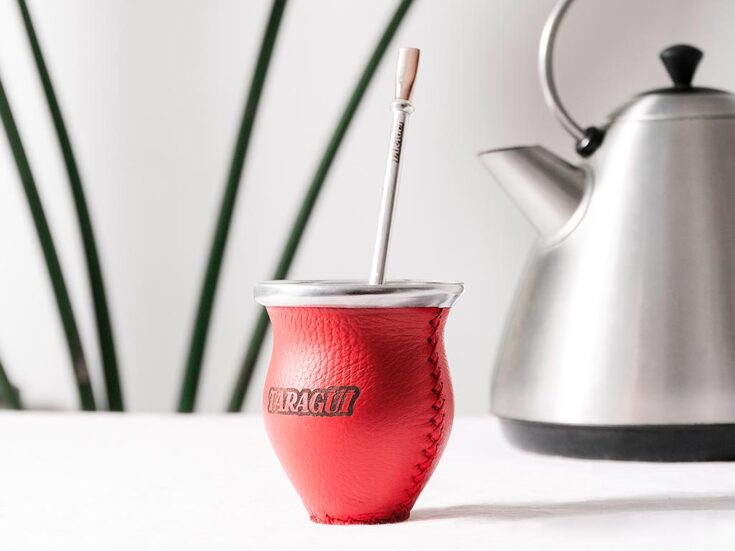 I’ll end with the most famous and beloved popular Argentinian food, yerba mate. It’s not so much a food as an herbal tea, but it is the backbone of Argentina’s daily social and culinary culture.

Yerba mate comes from a South American plant. Its leaves are dried, chopped, and packaged to be used as a caffeinated tea infusion.

You drink it by putting the dry leaves in a metal or wood cup with a filter/straw explicitly made for drinking mate. You pour hot water over the leaves, which become instantly infused with a strong, bitter flavor, sucking one or two small sips at a time through the metal straw.

All Argentinians drink mate. They drink it alone in the morning. They drink it with friends in the afternoon, using precise etiquette for serving and passing around the small yerba cup.

Argentina’s diverse and delicious cuisine matches its vast and beautiful geography. Its location along the Andes offers dishes from pre-Hispanic indigenous cuisine.

After exploring the incredible selection of popular Argentinian foods on my list, your next stop may be to book a flight down so you can wine and dine through your Argentinian vacation.

Check out other South American cuisines, like famous Brazilian dishes!