Algeria is a beautiful country with a rich history and even better food. The cuisine in Algeria is the perfect blend of Mediterranean, French, and North African flavors.

Most Algerian food is a blend of veggies, meat besides pork, and cereals with a little kick, freshness, and many complex flavors.

Here are some of the most popular Algerian foods you can try. 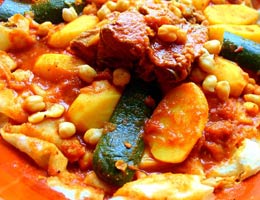 Chakchoukha is one of the oldest Algerian dishes, dating back to ancient times.

It's torn up flatbread, called Rougag, that they top with a warm stew. Most people make the flatbread at home, but store-bought is fine too.

They make the stew with plenty of veggies, lamb, and Algerian spices.

Algerian Noodles, known as Rechta, are a great dish that Algerians enjoy year-round.

The noodle dish is traditionally made entirely by hand, even the noodles. The noodles are made with grain flour before a sauce consisting of chickpeas, chicken, veggies, and a ras el hanout spice mix.

It's surprisingly easy to make, and while eaten anytime, it's great on special occasions. 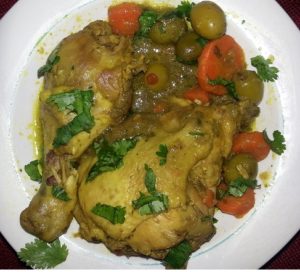 The meal combines chicken, and veggies like celery, potatoes, and carrots, with green olives, lemon juice, and seasonings. It's best served with bread.

It's a little spicy, flavorful, and comforting. 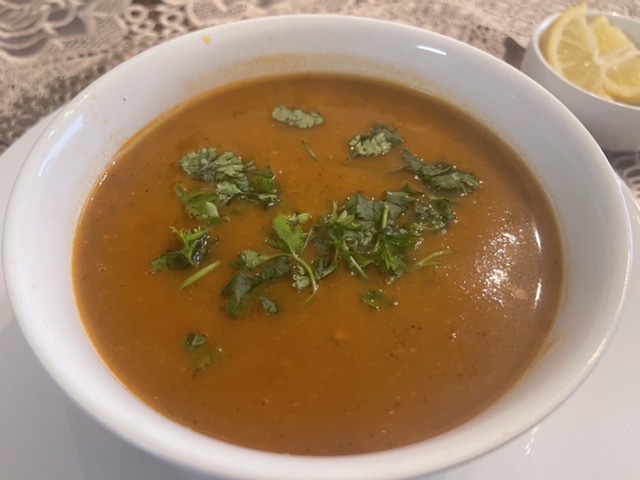 You'll find dozens of soups and stews throughout Algeria and other African countries, but tomato soup is the most well-known in Algeria.

Also known as Harira, this rich tomato soup is made with pureed tomatoes, veggies, and herbs like coriander, lentils, and beef or lamb to add some additional flavor profiles. 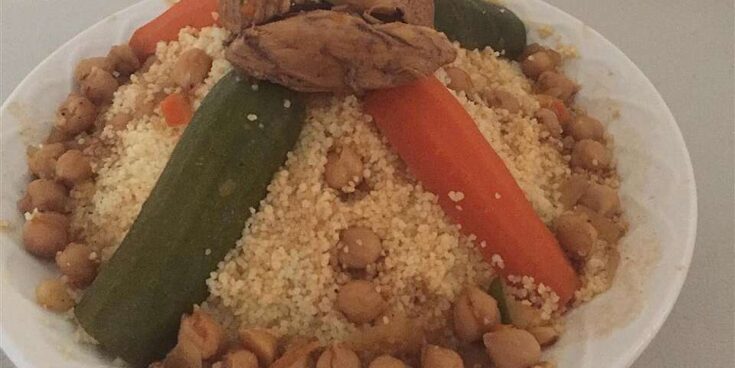 Couscous is the most famous dish from Algeria, and they're known for sharing this food with the world.

Most Algerians eat couscous on Fridays thanks to an old tradition, but you can eat it whenever. The recipe above includes mutton chops, chicken, potatoes, turnips, and other veggies on top of the couscous.

It's a hearty dish that won't leave you hungry. 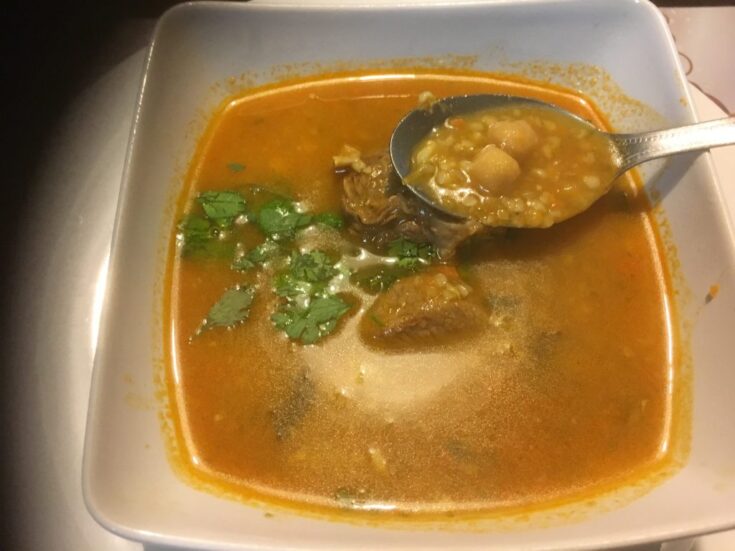 Another popular Algerian food is Chorba Frik, El Jari outside the capital, is mainly eaten in Northern Algeria during Ramadan.

The soup is made with a combination of beef and lamb, tomatoes, potatoes, other veggies, and Frik. Frik is an ear of specific wheat that gives the soup a greenish color.

Many believe this soup has digestive healing properties, which is why it's the perfect dish to break their fast. 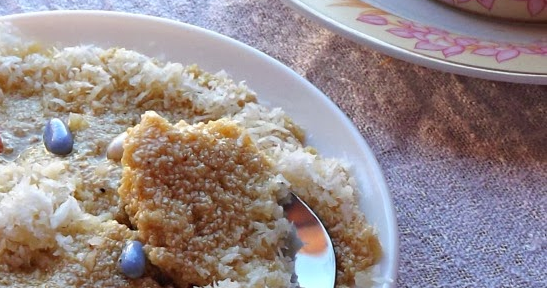 One of the most popular desserts in Algeria is Tamina.

This delicious and sweet dessert is commonly made to celebrate the birth of a new baby. You make it with ground semolina, honey, and butter.

The best part is that people can garnish it with whatever they want. Typical toppings include cinnamon, hazelnuts, and almonds. 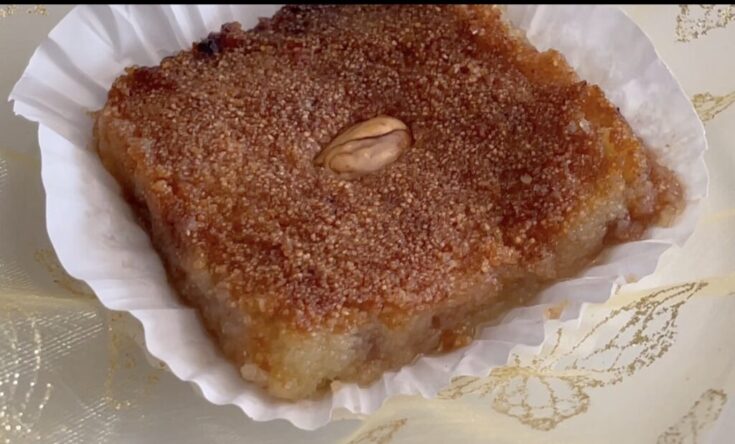 Ramadan is a time for great food, and it wouldn't be Ramadan in Algeria without Qalb el Louz.

This dessert is made with ground almonds, peanuts, semolina, and syrup. The syrup is made with water, rose water, and plenty of sugar to sweeten the almonds and semolina.

Some people like the dish with just those ingredients, but you can also top it with cinnamon and honey. 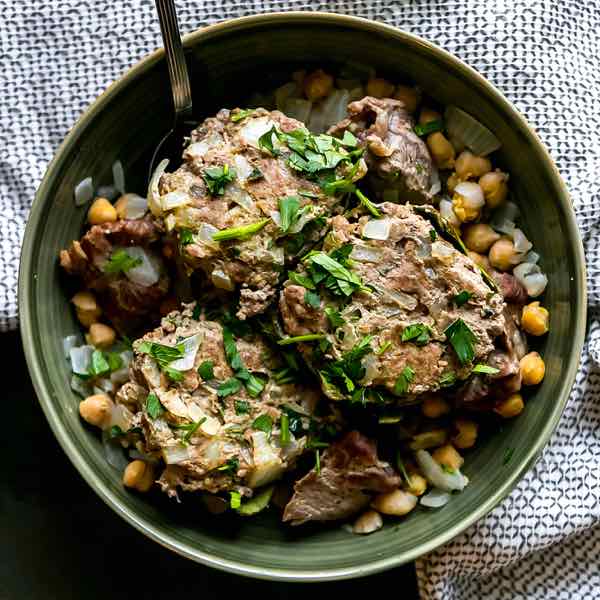 Dolma dates back to the Ottoman era and is a popular dish in Algerian cuisine.

It's made with veggies and meat, much like their other dishes. The difference is that they use ground lamb and stuffed artichokes. People usually serve it over the lamb and a stew.

It's rich in vitamins, minerals, and fiber. It's easy to cook and perfect when you don't have much time. 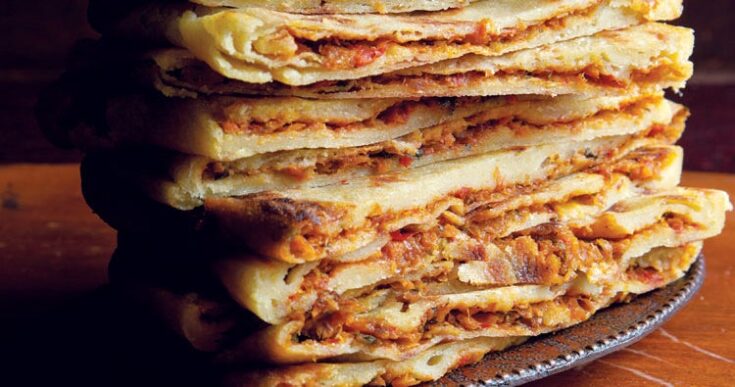 Semolina is widely used in Algerian cuisine, and another dish they use it for is Mhajouba or Mhajeb.

It's one of the delicious flatbreads they stuff with onions and tomatoes. Some people call it the Algerian crepe.

It's a little spicy, and you can make it with the recipe listed above and find it at many street vendors throughout the country. 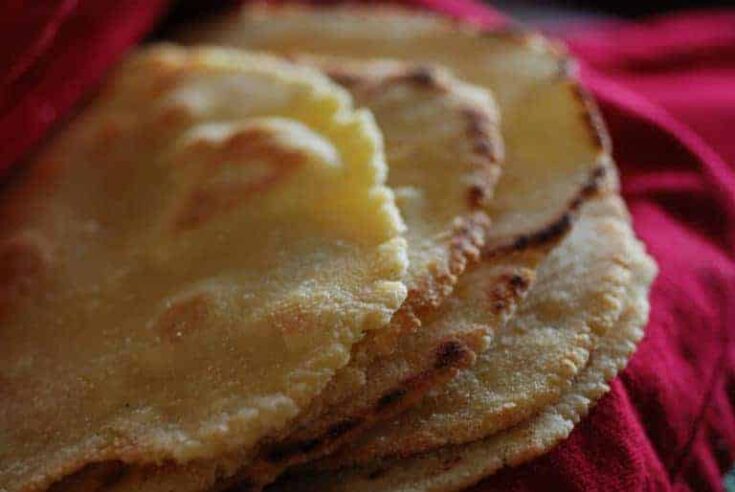 Depending on where you're at in Algeria, Kesra has a different name.

Despite the other names, it's the same concept. It's a flatbread that's made with cold-pressed olive oil. It's made with baker's yeast, making it super fast to make.

Because it's easy and fast to make, you'll find it as a side to many Algerian meals. 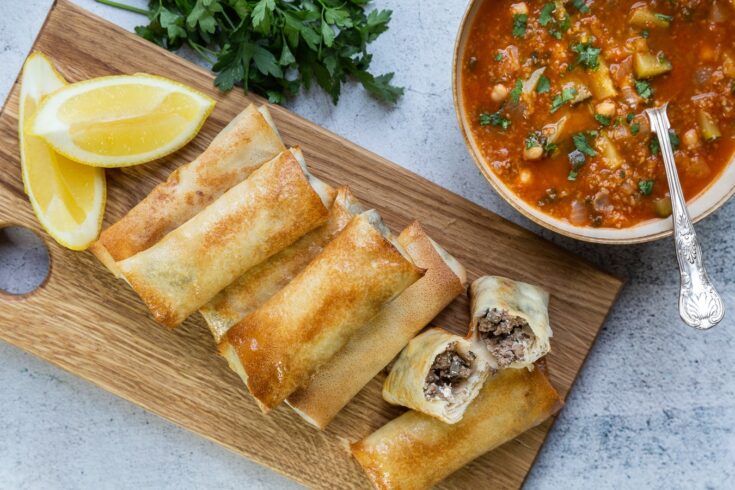 Bourek is one of the most popular appetizers in Algerian cuisine.

It's a pastry filled with meat and is slightly different throughout the country. Most people use beef or lamb, but some recipes use shrimp, tuna, and other meats.

Other fillings include onions, carrots, potatoes, or whatever veggies you have on hand. 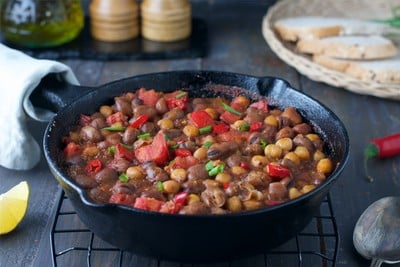 There's nothing like a hot soup during winter, and in Algeria, Dobara is that soup.

It's perfect for keeping you warm and full. You can make it with beans, chickpeas, or both.

Before making the soup, you'll soak the beans in water for a whole night. Recipes tend to have several chilis and spices that give the soup a little kick. 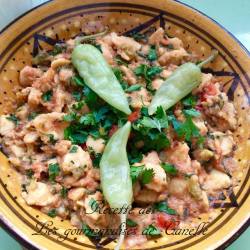 This dish isn't for the faint of heart; it's very spicy, trust me.

It's delicious when you add tomatoes on top and serve it on a semolina pancake. 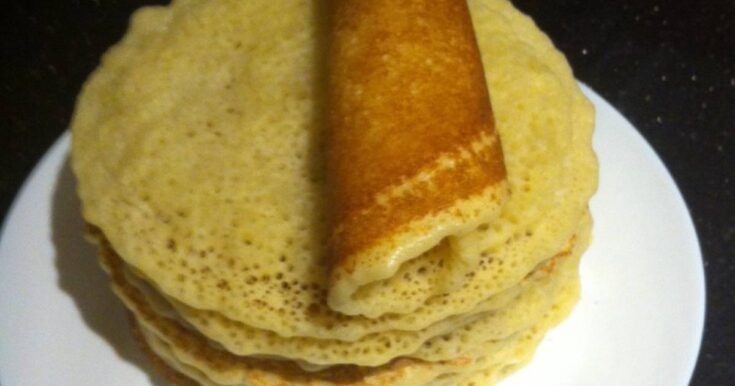 Baghrir is a semolina pancake that almost all Algerians love.

It's spongy, and when you make it right, there should be hundreds of little holes throughout the pancake. To make the pancake, you'll need skim milk, eggs, semolina, warm water, salt, and dried yeast.

You'll love eating it with honey butter which the recipe above shows you how to make. 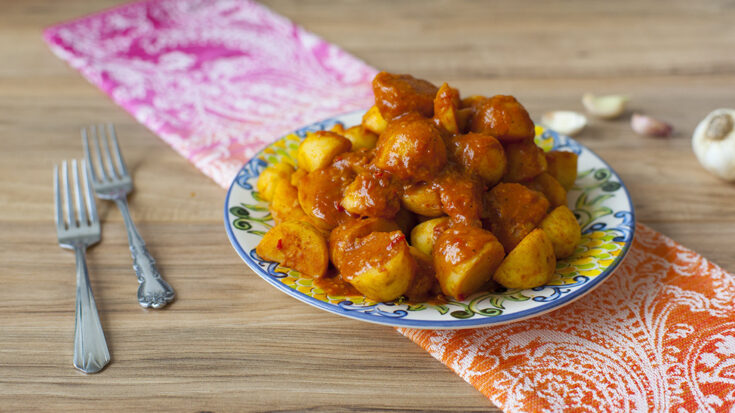 One of the easiest Algerian meals to make is Chtitha Batata.

This vegetarian dish is perfect as a main dish or on the side of a meat dish you make. It's made with potatoes and onions and simmered in tomato sauce.

The seasonings make it what it is with cumin, garlic, and paprika. The sauce is traditionally thick, but you can thin it out as you see fit. 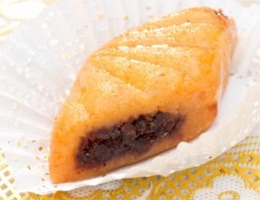 There's nothing better than a fried dessert, and Makrout is the best in Algeria.

It's fried semolina that you can dip in sweet honey. You'll roll the dough out and then deep fry it in oil.

Some people top it with dates, figs, and other fruit besides honey.

There you have it! Some of the most popular Algerian food you can try.

Be sure to check out each recipe and give one or more of them a try. Check out similar foods that influence Algerian cuisine, like Mediterranean dishes, French food, or African cuisine.